Stories You'll Enjoy
Home / Creekbank Blog / The One and Only, Rusty Thompson

The One and Only, Rusty Thompson 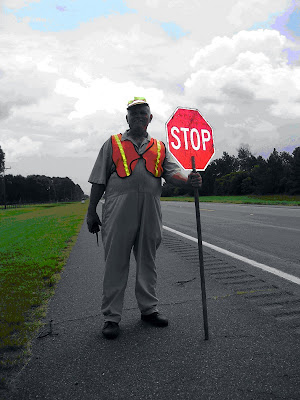 Rusty Thompson on the highway

In the coming weeks, we’ll be blogging our funniest stories. Some will be new and others will be old favorites.

The following one, entitled “Rusty” is from my third book, Wind in the Pines. It’s a favorite story of my friend Peggy Benoit.

Let us know your favorite funny stories from my books, and we’ll blog them.

As I’m walking down the road to the camp entrance, I look at the intersection that serves as the center of Dry Creek community and I see him… There he comes… He’s walking down the middle stripe of Highway 113. It’s Beauregard parish’s most recognizable citizen—Rusty Thompson.

Behind Rusty comes a work group of inmates clad in orange jumpsuits. They are cleaning the roadside ditches of trash. Accompanying this human caravan is a prison van and DOTD dump truck, both flashing their amber caution lights?

It’s the closest thing we’ve seen to a parade here in Dry Creek, and there is no doubt who the drum major of this parade is. It’s Rusty Thompson.

He’s wearing his old tan jumpsuit with an orange vest completing his wardrobe. He wears a baseball cap cocked on the side of his head and rhythmically waves an orange caution flag. In his front vest pocket is an empty styrofoam cup, ready to fill with coffee if someone offers some.
To say that Rusty Thompson is walking would be a gross understatement of his gait. I would say he is high stepping it ahead of everyone else.

His unusual gait, location, and style cause me to flash back to the Grambling State University band. I once saw them perform and their drum major moved a lot like Rusty: loosely stepping out, every limb grooving in an impossibly different direction.

There may be a sergeant in the van and a driver in the truck, but this is Rusty’s work crew and he’s leading it well.

After talking with Rusty on the roadway, I invite the whole crew back to the camp for lunch, to which they readily agree.

As Rusty and his entourage pass by, I tell Jake, one of our younger workers, “That man right there is Rusty Thompson, the most well-known man in Beauregard Parish.”

There are all kinds of reasons why folks know Rusty. The biggest one is that he is a man of the road. Rusty has worked for the Highway Dept. for over 25 years. During this time and throughout his entire life he has never driven or owned a car. I’ve always found it ironic that a lifetime highway worker has never owned a car, but with Rusty Thompson, many things are both ironic and comical.

So Rusty’s mode of transportation has always been his feet—or rather his thumb. He is our area’s most well known hitchhiker. That is how he gets to work, church, ballgames, shopping, and even courting. (He once had me drop him off at a “woman friend’s” house who was cooking supper for him.)

Many times I’ve topped a hill on Louisiana 394 or U.S. 171 and seen a silhouetted figure ahead on the road shoulder. Long before I could make out any features, I would confidently know it was Rusty. No other human being could naturally stand in the posture of Rusty: feet spread out, head cocked, and right thumb sticking out.

Many people in our area have Rusty Thompson hitchhiking stories. I’ve heard many variations on this basic story:
“We were going to a basketball game in Opelousas and we passed Rusty on the highway. When we walked in the gym two hours later he was already there, sitting in the bleachers, eating a bag of popcorn.”

My favorite Rusty hitchhiking tale is one I’ve never been able to get him to admit or deny:
Years ago a Dry Creek native was getting married in the north Louisiana town of Jonesboro. Rusty caught a series of rides to arrive just before the wedding. After the wedding was over and the reception ended, Rusty knew he needed to get a ride south.

Fortunately, he had overheard that the groom and bride would be honeymooning in Beaumont, Texas. Sure enough, he bummed a ride with the newlyweds and had them drop him off when they went through DeRidder.

I hope it doesn’t seem like I’m making fun at Rusty’s expense. He will laugh the hardest when he reads this story. He is a man who loves to tease, tell stories, and just enjoy being around folks.
To some, Rusty might seem simple but don’t underestimate his mind. He is a genius with figures and numbers. Years ago, older boys would tell about his calculations in the watermelon fields. He could figure all types of amounts, weights, and distances.

He also possesses a phenomenal memory. A few years ago, he told my wife, “DeDe, you played on that Harrisonburg 1972 state championship basketball team that beat East Beauregard 36-19.” I later consulted an old yearbook, and sure enough, there was the score—exactly as Rusty recalled it.

He also is a whiz with names and knows everyone. He can also trace most family’s ancestry back several generations. I always encourage teenage couples who are in love to avoid Rusty, because he’ll go back into your family trees and figure out some way that the two lovebirds are kin to each other.

About 1969 Rusty began refereeing basketball. I was amazed that he could pass the vision portion of the test, if there is one, because his vision has never been good. This is attested by the fact that he’s been “blindsided” by at least two cars on his flagman’s job.

Rusty was at his best as a basketball official. He loved the game, knew nearly everyone in each gym, and enjoyed the crowd’s attention. Consistent with his personality, every call was made with great dramatic flair.

In addition, for some reason most fans and coaches cut him slack when bad calls were made, which were numerous. However, I did hear once that a family he rode to the game with refused to let him ride back because of a game-ending controversial call that Rusty made against their team.

John Rudd, a DeRidde
r native who went on to play for the New York Knicks in the NBA, told me of one on-court experience with Rusty. He related that a loose ball scuffle under the goal brought a whistle from Rusty. John swears that Rusty spun around and dramatically pointed at him for the foul. “Foul on 00 for hacking on the arm.”

John said he was standing far away from the loose ball. He said Rusty whirled as if he was doing a dance step before pointing him out.

However, my favorite Rusty-refereeing story is one I witnessed in about 1970. East Beauregard was playing Elizabeth in the East Beauregard High gym. This was just before integration began in public schools in Louisiana.

Elizabeth had a fine basketball player named Charles Robinson. He was a member of the only black family in Elizabeth. He was a fine ball player and went by the nickname of “Shine.”
Rusty was refereeing this game, which E.B. was winning easily. Due to the lopsided score, the student section had become bored and needed something to excite them.

Some smart aleck student started yelling “Throw the ball to Snowball.” Of course, this ignorance was directed at Charles Robinson, who was probably the first black player to play in E.B.’s gym.
This went on for several few trips up and down the court. I kept waiting for a principal or teacher to come over and stop the shenanigans from the bleachers.

However, there was no need for anyone else to stop the catcalls because Rusty took charge. He waved his arms as he shrilly blew his whistle, and then turned toward the student section as the crowd suddenly quieted.

Then Rusty wailed out in indictment of the entire student section:
“Technical on you…for calling him ‘Snowball!’”

All I remember is how the quiet crowd exploded in laughter and guffaws. Even the Elizabeth players, including Charles Robinson, were doubled over laughing and shaking their heads.
Not long after the infamous snowball game is when Rusty retired and officially hung up his whistle.

However, in reality Rusty was still a referee at heart. He now took up his permanent place of honor against the wall on the east end of the gym. Today if you attend a game at our school, you’ll see him leaning against the cinderblock wall. From this vantage point he helps the black and white striped “officials” call the game.

During my years of coaching basketball, I would often look at Rusty to see if he agreed with a call under “his basket.”
I especially enjoyed seeing Rusty’s reaction to basketball’s toughest call: whether two players’ collision was a charge or blocking f

I’d look down that end of the court where the “real” referee signaled a blocking foul on the defensive player. Rusty would sadly shake his head as he dramatically made the opposite signal for a charging foul, just steps away from the referee. I would elbow Coach Larry Greene and say, “I don’t know if that call was right, but Rusty sure didn’t agree with it.”

I close with one final Rusty story:
Once a Beauregard Parish couple went to Rome on vacation. On Sunday, they decided to visit the Vatican for a papal appearance. They were part of a huge crowd that was assembled in St. Peter’s Square for the pope’s appearance. Right on time, the pope came out onto the balcony. Beside him stood another man.

The Americans stood there, pointed and asked a nearby Italian, “Who is that other guy up there?” The Italian answered without hesitation, “I don’t know who the guy in the tall white hat is, but that’s Rusty Thompson up there on the left.”

You and I both know this story from Rome is not true, but knowing Rusty Thompson, only a few weeks in Italy around the Vatican would probably make it so.

By the way, do they play basketball in Rome? I wonder if a fellow could hitchhike from DeRidder to the Vatican. You never know with Rusty. That’s Rusty Thompson, the most famous man in Beauregard Parish.

Afterword:
Of all the people I’ve ever mentioned in my writing, no one if more proud to be in print than Rusty. He is a good sport, good friend, and makes life fuller and more interesting for all of us.

I write to have influence and impact through well-told stories of my Louisiana and African sojourn.
@curtiles
Previous Honduras
Next The Writing Life: No Retreat!