A Note from Curt:

As long as I’m alive, the story of Sgt. Leroy Johnson will be remembered.

It’s a story worth telling, worth passing on. 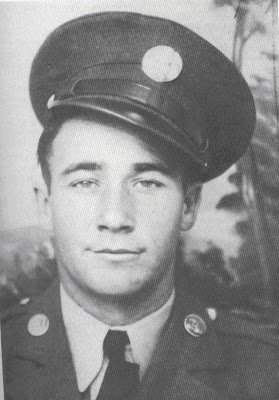 This is the story of Sgt. Leroy Johnson, United States Army.

Since 1965, a bronze plaque has stood on the median of Louisiana Highway 10 in the town of Oakdale. This plaque briefly tells the story of Sergeant Leroy Johnson. The inscription on the plaque ends with the wonderful words of Jesus from John 15:13,

Greater love has no one than this, that he lay down his life for his friends.

Leroy Johnson was born on December 6, 1920 near Caney Creek, Louisiana. His father was a carpenter and his mother was busy rearing a large family of children.

Growing up, Johnson knew what was like to work hard and do the best he could with what he had.

Men like Leroy Johnson, who later fought in our greatest war grew up in our nation’s hardest time – the Great Depression.I’ve often thought that these difficult years prepared many of these future soldiers for being part of the victorious American armies that fought throughout Europe and the Pacific.

Many young men of this generation found work with the Civilian Conservation Corps. The “C.C.C. Camps” as they were called, gave these men jobs, some income (much of which had to be sent home to their families) and most importantly, a sense of self-respect and work skills.

Additionally they learned to live and work together, a trait that came in handy during the next decade’s war years. Leroy Johnson worked in just such a camp in the Kisatchie Forest of central Louisiana.

Lawrence Lacy, a Dry Creek area resident described his friendship with Johnson, “He was a good man to work with, and he liked to fight. We went at it more than once, but he was also a good friend to have.”

In 1941, prior to Pearl Harbor and the outbreak of war, Leroy Johnson joined the Army.

When he was sent to boot camp, it was the last time he would ever be home in Allen Parish and see his family.

Evidently, the Army agreed with him. From his letters home and comments from the men he served with, he was born to be a soldier.

He was placed in the 32nd Infantry Division. Most of the men in this Division were from the northern states of Wisconsin and Michigan.

This division was involved in the large-scale maneuvers then being held in the forests of Louisiana.

New southern enlistees like Johnson were plugged into these units.

From reading his service letters and the history of this division, we can track his travels over the next few years of the war.

He was part of the campaign to take the eastern portion of New Guinea from the Japanese. This invasion was to stop the Japanese advance toward Australia. General MacArthur stated his strategy when he said, “We will protect Australia from New Guinea.”

Reading the official division history, it is learned that the fighting on this large island was difficult, slow, and deadly. The Japanese troops were experienced jungle fighters. The 32nd Division, which would later spend more days in actual combat than any other division in the war, was green and untried.

During this campaign was when Leroy Johnson first showed his prowess as a soldier.

He was awarded the Purple Heart as well as the Silver Star for gallantry.

Sgt. Johnson spent part of the next year recuperating in Australia from his wounds in New Guinea.

The 32nd Division, or Red Arrow Brigade as its men called it, were part of the 1944 invasion of the Philippines. The fighting with the Japanese on the many islands of this country was tough and deadly.

Company K, in which Sergeant Leroy Johnson served, landed on the eastern Philippine island of Leyte. As they fought their way inland they reached an area near the Filipino city of Limon.

The commanding officer of Company K was Johney B. Wax.

Captain Wax, also a Louisianan, had been Johnson’s commanding officer for several months.

The brave act for which Leroy Johnson won the Congressional Medal of Honor is best described in the following two documents. The first is the official Army citation of his heroism on December 15, 1944.

The second is a transcript of a personal letter written by Captain Wax to Sgt. Johnson’s parents shortly after the end of the war in 1945.

On 12/15, 1944 Sgt. Johnson was the squad leader of a 9 man patrol sent to scout a ridge held by a well-entrenched enemy force. Seeing an enemy machine gun position, he ordered his men to remain behind while he crawled within six yards of the gun. One of the enemy crew jumped up and prepared to man the weapon.

Quickly withdrawing, Sgt. Johnson rejoined his patrol and reported the situation to his commanding officer. Ordered to destroy the gun, which covered the approaches to several other enemy positions, he chose three men, armed them with hand grenades, and led them to a point near the objective.

After taking partial cover behind a log, the men had knocked out the gun and began an assault when hostile troops on the flank hurled several grenades. As he started for cover, Sgt. Johnson saw 2 unexploded grenades that had fallen near his men.

Knowing that his comrades would be wounded or killed by the explosion, he deliberately threw himself on the grenades and received the full charge in his body.

Fatally wounded by the blast, he died soon afterward. Through his outstanding gallantry in sacrificing his life for his comrades, Sgt. Johnson provided a shining example of the highest traditions of the U.S. Army. This following letter was sent to Johnson’s family by his commanding officer, Captain Johney Wax:

Several times during the last few months I have received good news, but none made me any happier than when I picked up last Monday’s Times-Picayune and learned that your son had been awarded the Congressional Medal of Honor.

He was a fine boy and every inch a soldier.

I was closely associated with him for several months and always found him cooperative and helpful in every way.

I witnessed the incident for which he received our country’s highest award.

After receiving his fatal wound, he managed to get up, take about three staggering steps and reach about three of us who were rushing up the hilltop to help him. We lowered him rapidly down the hill and he died within a few minutes.

Nothing can bring back his life but I am sincerely glad that a grateful nation could in some way, even though small, show their appreciation for what he did. His name hand the sacrifice he made will always stand out in a Division that has been outstanding throughout this war.

(Captain Wax later served as long-time principal at Live Oak High School where he touched many lives through the same leadership, concern, and discipline he exhibited as a company commander. He was present at the dedication of the Oakdale plaque on February 13, 1965. After a full life of investing in young people and bringing out the best in others, Johney Wax died in 1991.) At a later date, his body was moved to the American Military Cemetery near Manila, the capital of the Philippines.

Among this vast number of graves are the remains of six other Congressional Medal of Honor recipients.

In addition, the New Orleans army base was renamed in his honor and memory as Camp Leroy Johnson. Although the base later closed, a bronze portrait of Sgt. Johnson once displayed at the base can now be seen in the Allen Parish Courthouse in Oberlin. Thinking about Leroy Johnson’s selfless act on that day over seventy-five years ago, two questions come to mind:

First of all, when did he decide to fall on those hand grenades? Was it a split-second decision where everything happened so quickly that all action was instinctive?

Then maybe Sgt. Leroy Johnson’s act of laying down his life to protect his three fellow soldiers was not spontaneous. Could it have been a decision, or better yet, a commitment, he’d made days, even weeks, maybe months ago of what he would do in a situation like this?

Maybe he had sat around a battlefield campfire one night – the men of his company eating cold C rations, covered with mud. At that moment, he decided that he would gladly lay down his life for any of these men.

Did he look around at these men gathered in a circle and think, “If I need to, I’m willing to die to save these men?”

Then my second question is maybe even more thought-provoking: What causes a man to throw himself, knowing sudden certain death awaits, on a hand grenade?

In Sgt. Johnson’s case, he outranked the three men with him on this patrol.

Why was he, their leader, willing to die to save them?

My humble belief is that he did it because of love. Probably soldiers of Johnson’s group would have been embarrassed at that term: I did it because I love you.

But I go back to the words of the plaque in Oakdale. They are the words of Jesus, who also knew what He was talking about when discussing self-sacrifice:

“Greater love has no man than this- that he lay down his life for his friends.”

I can think of no better way to say it and I will not attempt to put it differently. Jesus’ words, as well as His actions, speak for themselves.

I guess one of the reasons I’ve always been fascinated by the story of Leroy Johnson is due to how his actions in the Philippines is a reminder of what Jesus did on the cross for us.

Once again the leader, the “ranking soldier” in this unit saw that quick and decisive action was required. He did not appoint a lesser soldier to take action.

He had been assigned this job by his commanding officer who watched from a short distance.

He would finish this assignment – no matter what it took.

Freely, and willingly, he took on the full brunt of the enemy’s device.

No one made him do it.

He did it on his own.

Jesus freely sacrificed His life. Although there is no need for it, He would gladly do it again to save your soul.

And a soul, the part of a human that lives on when this physical body dies and decays, is invaluable…and priceless… and worth whatever it takes.

A soldier’s story of sacrifice.

A soldier’s story to remember

With both gratitude and respect.