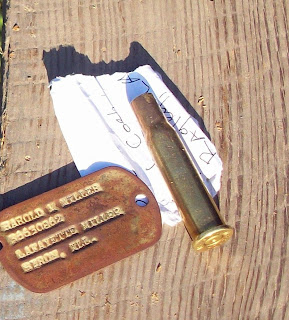 Readers: This blog contains a three-page synopsis (0verview) of my current work in progress. I’ve looked at it until my eyes are crossing. I’d appreciate any and all reader feedback for improvements before it begins its journey to publishers.A Spent Bullet

I’m looking for grammatical as well as plot ideas, weaknesses, or confusion.

WARNING: If reading the entire plot of a book keeps you from enjoying the book (like people who tell you the ending of a movie) don’t read this.

SECOND WARNING: The final book will probably be completely different from this synopsis. That is one of the joys of fiction: a book “writes itself” and characters will often do things you didn’t expect (or even want) them to!

A Spent Bullet is a love story, but it’s a love story that takes place during an important but largely forgotten event in American history.

A Spent Bullet is an historical novel taking place in Central Louisiana during the 1941 Army Maneuvers. With Europe and the Pacific embroiled in war, America’s leaders plan a series of large-scale war games to prepare for war.

Officers choose western Louisiana for several reasons: plenty of government-owned land, a low civilian population, and difficult terrain with few good roads. This latter asset will allow the military brass to settle a contentious debate: can modern mechanized forces defeat a traditional foe where there are few good roads?

In late summer of 1941, a half-million soldiers converge for the testing of men, officers, and equipment. Divided into “Blue” and “Red” armies, the unscripted battles soon rage up and down the Louisiana/Texas border.

Brilliant officers unknown at the time—such as Colonel Dwight Eisenhower and General George Patton—make names for themselves during these battles.

A Spent Bullet is not only a history of the Louisiana Maneuvers, but details a personal love story between a soldier and rural schoolteacher that draws the reader into the plot.

A Spent Bullet uses the 1941 Army Maneuvers to tell the story of an unlikely love between a rural Louisiana schoolteacher, ELIZABETH REED, and a Wisconsin soldier, PVT. HARRY MILLER.

The story begins with a chance encounter on September 1, 1941. As a convoy of military vehicles travels through a dusty small town, a note stuffed into an empty M-1 cartridge lands at Elizabeth’s feet as a soldier yells, “Write me. You’re beautiful.”

Elizabeth, a twenty-year-old schoolteacher, is standing on the corner with her ten-year-old brother, BEN. She has no interest in soldiers or tossed bullets and ignores both, but Ben, who will be a key player in this story, slips back and retrieves the bullet.

In the next chapter, we meet Harry Miller, and it is clear how he detests everything about army life. He is from a wealthy Milwaukee family and is not a soldier by choice. An arrest back in Wisconsin resulted in Harry joining the National Guard in lieu of a prison sentence. Shortly after his enlistment, all Guard units were nationalized, and Harry found himself in Louisiana as a full-time soldier.

Through the scheming of Ben and Elizabeth’s grandmother, a written correspondence begins between Elizabeth (with the grandmother writing “for her”) and Harry.
It was actually one of his “friends” who wrote and tossed the bullet with Harry’s address on it, and Harry is reluctant to answer “Elizabeth’s” first letter. Yet, in spite of his misgivings, Harry writes Elizabeth.

The story alternates between scenes of Elizabeth’s family and the soldiers who are preparing for the first “battle.” Harry’s division is part of the Blue Army that will fight against the forces of the Red Army, stationed farther north along the Red River. On the day before the battle begins, the weather turns foul, with a tropical storm settling over the southern half of Louisiana.

As Harry’s unit takes its battle position, he observes various events that tell much about the army and its men. We follow his unit as they march north, and Harry realizes that in spite of his dislike of military life, he is the type of soldier others look to in battle. This portion of the story reveals Harry’s growth from self-centeredness and self-pity to one of duty and discipline.

Back at his company’s bivouac after the first battle, Harry receives two letters in reply to his earlier letter to Elizabeth. The letters, both addressed to Harry, are in different handwritings with completely different messages. The first tells him “she is not interested in writing” and asks him to cease writing. The second letter (written by the matchmaking grandmother) warmly invites him to visit their church in Bundick the next day. Of course, Harry is confused, but the photo contained in the second letter wins out—it’s a school photo of a striking young teacher and he cannot get it out of his mind, in spite of his unease.

The next morning finds Harry hitchhiking to the crossroads community of Bundick. When he arrives at the church, the plot thickens as he is introduced to Elizabeth by Ben. As the day unfolds, everything that can go wrong does.

Even though this first encounter with Elizabeth and her family and neighbors (especially her family) seems like a disaster, the defining moment of their “first date” is a community singing on the porch of the Reed homestead. In spite of their diverse backgrounds, Harry and Elizabeth discover they have a mutual love of music.

Elizabeth’s family tree is full of musicians, with her instrument being the fiddle. After she plays an old mountain tune, Harry takes her fiddle and plays a classical waltz. The instrument he’s holding is no longer a fiddle; it’s now a violin. It’s the first time since leaving Milwaukee that Harry has touched a violin, and his playing sets loose emotions in both Elizabeth and himself. As he finishes, Elizabeth’s father sums it up, “The violin sings, while the fiddle dances.”

The only question is if whether the beautiful music developing between them can survive the future’s uncertainty. The next day, the Battle of Shreveport begins and Harry’s company joins the fighting. During their movement north, Harry observes what the “fog of war” does to soldiers and officers. This section reveals the humorous and touching true stories remembered by the soldiers who took part and the civilians who watched it unfold.

After five days of marching and battle, a truce is called, ending the great Louisiana Maneuvers. As officers evaluate the results, the soldiers are given a well-deserved furlough, allowing Harry to return to Bundick to see Elizabeth. This visit allows him to deepen his relationship with Elizabeth and her quirky family.

While there, a tragic accident occurs: an army truck strikes Ben, who dies soon after being rushed to a nearby hospital. Harry observes how this simple country family’s shaky yet solid belief weathers a crisis. He is especially touched by Elizabeth’s mother and her complete forgiveness of the soldier who struck her son.

Ben’s death is also the catalyst for both Elizabeth and Harry’s revelations of their past secrets. Elizabeth became pregnant while away at college and gave her baby up for adoption, something not even her family is aware of.

Harry’s secret is that while driving drunk in Wisconsin, he caused the death of two innocent people. Ben’s death opens up the still fresh wounds of Harry’s accident. In spite of Harry’s deep regrets over his past, he begins to see how his life can be different, especially as he looks at his future through the dark eyes of this beautiful country schoolteacher. As Elizabeth shares the source of her faith with Harry, she realizes the most difficult part of repentance is often forgiving oneself from past mistakes.

During this time, both discover that families draw a circle around themselves—not to keep others out, but to keep family in. Harry also realizes that God works the same way, as he recalls Ben’s earlier words to him, “You’re in God’s circle of love and can’t get out.”
Their relationship is cemented through this time of crisis. When Elizabeth must visit her school classroom to remove items from Ben’s school desk, Harry is the one who goes with her. He walks beside her during the days after the accident.

Harry also faces another conflict: he must choose between being with Elizabeth in a time of special crisis or being AWOL. He rejoins his unit, hours late. He avoids AWOL charges through the intervention of the very soldiers who’d most tormented him.

As army units begin breaking camp, the greatest obstacle to Harry and Elizabeth’s relationship now becomes time. Harry’s division has returned to Camp Livingston, near Alexandria, before heading back north. He uses every free moment to see Elizabeth, who is eighty miles away.

During the days leading up to his unit returning to Wisconsin, Harry proposes to Elizabeth, both shocking and delighting her. Initially, the shock is greater than her excitement, and her reply is evasive and careful. Harry believes he has ruined the relationship by pushing too hard, too soon. However, on his next visit, he is greeted by her question, “Do you think I could get a teaching job in Wisconsin?”

They eagerly make plans. With Harry’s discharge date approaching in just over one hundred days (February 2, 1942), the future looks bright.

However, their plans, as well as the plans of millions of Americans, are disrupted on Sunday, December 7th. As Elizabeth and Harry learn about the Japanese attack at Pearl Harbor, it becomes evident that all bets are off as to the future.

Against most everyone’s advice, Harry and Elizabeth are married. A Spent Bullet ends with their brief and happy honeymoon at the Hotel Bentley in Alexandria. Now, it’s off to war for Harry and back home to teaching for Elizabeth.

Only the future will reveal what happens next, and that future awaits readers in the next book of the series, As You Were.

The plot of this story is woven together from true stories told to me by the many “Harry and Elizabeth’s” who met, fell in love, and married during the 1941 maneuvers.

Email your comments to curtiles@aol.com.