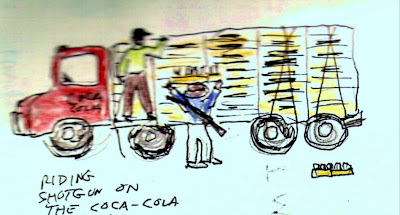 An Armed Guard on the Coca Cola truck

Sometimes I think things in the “Developing World” resemble the old American West.

I sketched this picture alongside a Honduran highway.

One of the Coca Cola workers had a shotgun slung over his shoulder.
He was truly “riding shotgun” like in a western stagecoach.

I love a cold coke so I could understand about how someone might be tempted to steal a case.
( I have an old story about the year when a mob stormed the Coca Cola truck during the Beauregard Parish Fair Parade. I was there and saw it happen. It was about 1972 or 1973 and happened right in front of the courthouse. It started with someone’s shout, “Free cokes for everyone.” They stripped the truck. Does anyone else remember this event?)

I bet that wouldn’t have happened if a man had been riding shotgun that day in DeRidder.
Riding shotgun like they do in Honduras.

Where even the Coca Cola truck has an armed guard.

I write to have influence and impact through well-told stories of my Louisiana and African sojourn.
@curtiles
Previous Corazon! A Good Word
Next Honduras Nov. 2011