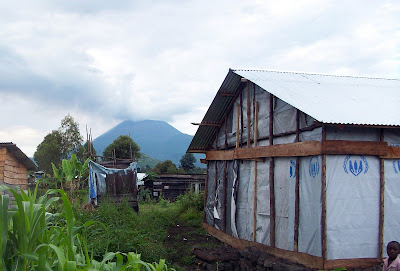 A church built on the rock… Volcanic Rock!
This is one of the Union of Baptist Churches near Goma, Congo. In the background is Mt. Nyiragongo (0ver ten thousand feet high), one of five active volcanoes in this area. You can see the smoke boiling out of the mountain. At night, you could see a red glow from the crater. One night, the upside down Big Dipper was above the mountain and seemed to be pouring water on the fire. It was cool (no pun intended) to see.

We were also far enough south to see the Southern Cross constellation.

As you can see, this church is very simple: using white tarp and scrap lumber. The floor is solid volcanic rock. Most importantly, the spirit was very sweet inside this church.

This area is about 3 degrees below the equator. Days and nights are nearly exactly the same length year round. Equatorial sun is hot but the high altitude of the region brings nice temperatures. 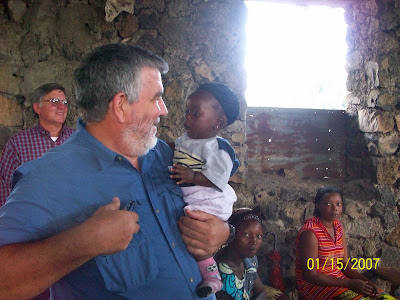 In the Congo, we worked with a wonderful missionary, Rusty Pugh. Here he is holding a baby. Rusty and his wife Debbie are the only two International Mission Board employees in the entire country. (Democratic Congo is one-third the size of the U.S.)

We really enjoyed being with this special man of God.
Rusty is on Facebook. Ask him to be your friend and you can keep up with his work in Africa.
(In the background is team member, Bill Calloway of Glenmora.) 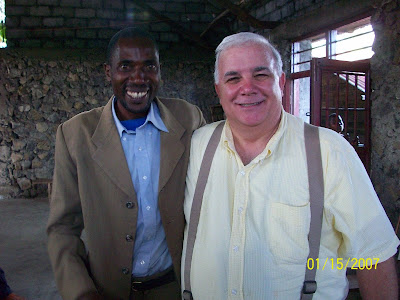 Reggie Burnaman of Glenmora is shown with Pastor Innocent Kazaviyo of Hoseanna Baptist Church in Goma, Congo. Reggie is also on Facebook and has been sharing about the trip. Pay him a visit.