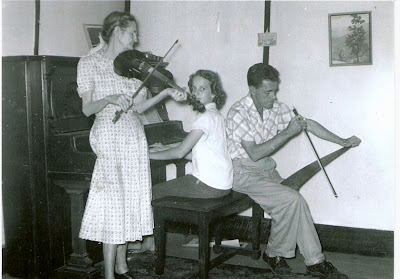 Aunt Margie and the “Shreveport Revival”

(Pictured above) My musical heritage. My great grandmother, Theodosia Wagnon Iles, on the fiddle, my grandfather Lloyd Iles “playing the saw” and my barefooted Aunt Margie Nell Iles Walker on the piano. This picture is circa 1950 and taken at The Old House in Dry Creek.

The Revival comes to Shreveport
This story on my beloved Aunt Margie is one that brings the biggest laughs of all when I tell it:

When I was fifteen, my parents temporarily lost their minds and allowed me to ride a greyhound bus to Shreveport to see my favorite group, Creedence Clearwater Revival.

I’d learned to play the drums by listening to their songs over and over on scratchy 33 1/3 albums.Daddy always said that if their drummer got sick, I could set in and play for them.I believe he meant it in jest, but I took it as a great compliment. By the way, their drummer was Doug Clifford.

At the time of my trip to see Creedence, (during the early 1970’s) my dad’s sister, Aunt Margie and Uncle Mark lived in Belcher, a small community north of Shreveport.

This Creedence concert was my first rock concert. Up to then, I’d dined on a steady diet of Johnny Cash and the Grand Ol‘ Opry. I’ll never forget when they dimmed the lights in Hirsch Coliseum and the opening act, Tony Joe White, began playing.

I asked the girl I was with, “What’s that funny smell?” She looked at me as if I was from Pluto. “You’ve never smelled marijuana before?”

I didn’t come that night for drugs, I came for the music. and I wasn’t disappointed. Tony Joe sang “Polk Salad Annie”, Freddie King came on and played his Texas blues, and I thought I was in Heaven.

Then Creedence took the stage and played their version of swamp rock and roll that I still love today.

Now before you think I was on too wild of a trip, I stayed at my maternal grandparents who picked me up from the bus station.

And “my date” was one of my Dry Creek Camp staffer friends who lived in Shreveport. (Betsy McLeod, where are you now?)

And the closest I’ve ever come “to smoking weed” was once making a bitterweed cigarette while burning trash in the back yard.

The day after the concert, before catching my bus south, I called Aunt Margie Nell Walker to let her know I was in town.When she inquired as to why I was there, I told her, “Aunt Margie, I came up here to see Creedence Clearwater Revival.”

You could hear the pleasure in her voice as she replied, “That’s just wonderful how you’ve come this far to go to a revival.”

I didn’t have the heart to correct her.Later, she told my mom how proud she was “of Curt’s one hundred-sixty mile trip to attend a revival.”

That was nearly forty years ago.

I’ve still never told her about the “Shreveport Revival”.

and I still love Creedence.

And I’m very thankful for my musical heritage.

Whether it’s “Shall We Gather at the River” or “Green River.”

“The Shreveport Revival” is excerpted from the short story “The Unbroken Circle of Music” in Curt Iles‘ book, The Old House.

If you didn’t get enough of the saw playing, (a little goes a long way) click here for a street player’s rendition of the theme from “Titanic.”

I write to have influence and impact through well-told stories of my Louisiana and African sojourn.
@curtiles
Previous An Unbroken Circle
Next Branded