“Some people go to their graves with their songs in them; let this not be said of me.”

We had a great time telling stories to the veterans. Best of all was hearing their stories. Nearly all are WWII and Korean vets and had memorable and touching stories of their service to our country.

As I left I encountered Mr. Tiger playing his bongo to Cajun music. According to the workers, he spends lots of his day playing. I thought about the saying quoted above. “Some people go to their graves with their songs in them; let this not be said of me.”

Or scroll down to view the video here:

Mr. Tiger is playing his song, and it appears to me that he’s going to play it to the end.

I told DeDe when I arrived home tonight. “When you send me to the nursing home one day, send send my conga drums and a CD player and I’ll be fine.”

I plan to be like my new friend, Mr. Tiger: playing my song… telling my story to the end.

I laughed when I saw the poster at the Veterans Home. (I did not tell them I was an ‘awesome story teller!’) 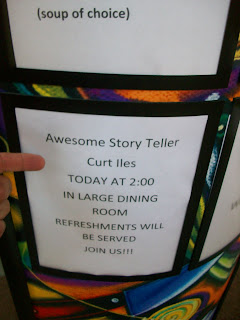 There are five war veterans home in our state. I’ve now visited two (Jennings and Reserve.)
They are new, fresh, and there is a spirit of dignity and respect for our veterans. I encourage you to drop by the one in your area.