Across The Pea Patch: A Story On My Hero, Don Hunt

Across the Pea Patch: A story on my hero, Don Hunt

I often write about traveling to far off places to share the good news of Jesus. Whether it’s Africa or Honduras, I always feel privileged to “go and tell.” Acts 1:8 tells us to “go to the ends of the earth.”

However, the greatest mission and ministry opportunities are right where we are. In the same verse in Acts, Jesus called it “Jerusalem.”

It’s the place we are.
Where we live.
Where we already know the culture, don’t have to learn a new language, get immunizations or a passport.

I was reminded of this today as I talked to Don Hunt.

Don Hunt is one of the people I admire most. He was my pastor for ten years, but he is much more than that.

He is my friend.
He’s also one of my heroes.

He refreshed my memory about this story I’m sharing. It’s a “Jerusalem” story. In this case, Jerusalem is a purple hull pea patch in Dry Creek.

When Bro. Don became our pastor in 1992, he began doing what he does best: building relationships. After he’d been in Dry Creek for a few weeks, he walked across the adjacent field to meet his neighbor, Arthur Crow.

Mr. Arthur’s wife, Annie Mae, was already a member of our congregation at Dry Creek Baptist Church. Mr. Arthur, now retired from driving the road grader for the police juror, was not a church-going man. He was a good man, but seemingly had no interest in church or outward spiritual things.

When Bro. Don walked over, Mrs. Annie Mae directed him to the pea patch where her husband was working. Don Hunt introduced himself and they visited as Mr. Crow said, “Let’s walk to the end of the row here.”

It was there that our pastor asked, “Mr. Arthur, I’ve just come to introduce myself and share Jesus with you.”

“I’m ready for Jesus. You just need to tell me what I need to do.”

There between the rows of peas Arthur Crow, in simple faith, turned his life and heart over to Jesus. He asked for forgiveness of his sins and “a new start.”

And that’s just what he got. He became a new man. It was evident to everywhere. He had a quiet joy in the Lord and became a faithful member of our church.

When Mr. Arthur was buried this week, Don Hunt couldn’t be there. He’s battling cancer and has been sick. *See photo below.

I called Bro. Don this morning and listened as he joyfully told me what I’m now sharing with you. I reminded him, “Arthur Crow is in heaven because of your witness.”

His reply was, “I just arrived at the right time. He was ready due to a lifetime of praying by his family and church.”

I know he’s right on that, but Don Hunt had the courage and love to step across the field to share with his neighbor. And on that day, a man was ready for new life and new birth.

Sometimes I wonder if it’s easier to fly to Africa to share about Jesus than to walk across the pea patch to a neighbor. It shouldn’t be, but it can be.

However, it’s no excuse for me not to.
Jesus talks about it in Acts 1:8 Jerusalem, Judea (our area), Samaria (anywhere where it’s difficult), the ends of the Earth.

It’s not a multiple-choice quiz. He calls us to be involved in some form in each area.
It may be the bush of Liberia or a piney woods pea patch.

Either way, it’s a privilege.
It’s also a responsibility. 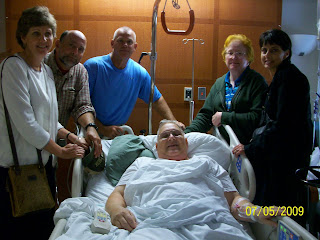 I write to have influence and impact through well-told stories of my Louisiana and African sojourn.
@curtiles
Previous A Day In The Life Of A Writer
Next Whatever It Takes