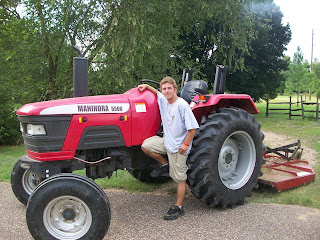 I’m 8000 miles from my hometown of Dry Creek. This is a draft of a story written four years ago.

Somebody send word to Nathaniel that I said, “Thanks again.”

Shown above is my neighbor Nathaniel. He proudly stands beside his tractor. I was bushogging yesterday in our fields when Nathaniel showed up. “I’ve come to help you with your mowing.”

Then he went to work helping more than cut in half a big job.
That’s the kind of place I live in.
That’s the type of neighbors I have in Dry Creek.

Next time you hear someone saying that there aren’t any good young people around, tell them about Nathaniel.

He’s an example of why I believe in the future.

This is my favorite “good neighbor” story. It’s from my first book, Stories from the Creekbank.

Kenneth Hodges was my pastor as a teenager. How can I begin to describe him? He was probably one of the countriest-looking men I’ve ever known. . . Tall and skinny with a large adam’s apple and a shock of wavy black hair, Bro. Hodges was just really down to earth . . . and that is why everyone in Dry Creek loved him. He was a “what you see is what you get” kind of guy.

But his physical appearance is not what made him special. It was his loving spirit and kindness toward everyone. When he became pastor of Dry Creek Baptist Church in the early 1970’s, he soon became “the pastor” to everyone in our community- whether they were church-goers or not. He had great rapport with all types of people.

Because he and his family lived in the old church parsonage on the camp grounds (located west of the dining hall) Bro. Hodges was always involved in all aspects of Dry Creek Camp. I fondly recall his family dropping in at meal time to help serve, visit, and eat with the staff.

Bro. Hodges was a very good preacher . . . But what he did best was “pastor.” He cared about people and it showed daily. I’ve always believed the following story is his “best sermon”:

One Monday Bro. Hodges dressed up in his best suit. I can still see it- A white leisure suit with blue stitching and buttons and white patent leather shoes. I always told him he looked like the Easter bunny when he wore it. He was going “into town” to a meeting at the Baptist Associational office. But first he needed to go by and check on an elderly member of the congregation. To do this he bypassed off the highway onto Joe Gray road. Country people can understand what I’m saying here . . . There is nothing worse than a red clay road after a rain in the winter months. As Bro. Hodges slid along the road in his old Buick, he came upon a problem in the road.

One of the local farmers was in the road vainly trying to round up three horses that had broken through the fence. The horses were definitely winning. If you’ve ever tried to re-fence animals after they escape from confinement, you can probably picture the futility and frustration of this farmer.

Bro. Hodges stopped his vehicle. I’m not sure what he thought- but I know what I’d had thought- There is no way I’m going to get all muddy in my suit. But that’s just what he did. He got out and helped get the horses in.

After the chore was done, the suit was no longer white. In fact it, and the shoes, were caked with red mud and ruined . . . Never to be worn again.

Bro. Hodges didn’t tell this story to anyone. He didn’t have to. The farmer, who was not a church-going man, told it. And everyone who heard it in Dry Creek told it to someone else. The story of the Baptist preacher helping to round up the horses was known by everyone in a few days.

And I’ll believe it was his best sermon as pastor of Dry Creek Baptist Church. It was a sermon preached in love and with willing hands and feet. And as I write this, it’s the only specific sermon I remember being preached by Kenneth Hodges. But it is a sermon that will live on in my heart and mind forever.

Not too long after this story, Kenneth Hodges was injured in a fall during a work day at Dry Creek Camp. He died about one month later. Because he was such a special friend to the camp, the Hodges Dorm was built and named in his honor and memory.

. “Greater love hath no man than he layeth down his life for his friends.” John 15:13