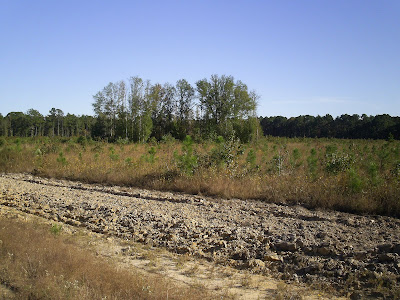 There’s a fine stand of young slash pine at Dead Man’s curve on the Longville Gravel Pit Road. I’ve watched with interest the growth of this forest. After the field was earlier ‘clear cut’ for its marketable timber, a hard-working Mexican crew then replanted it in straight rows.

By the following winter, the pines began to poke their heads above the grass. This year, they have emerged above the surrounding bushes and scrub trees. As time goes on, they’ll link their canopies, drop their pine straw, and completely wipe out the other growth in this field.

That is if a woods fire doesn’t kill them first.

Last week I studied closely the wide fire lane plowed around these pines. In our area, with the coming of true winter and the frosts that kill the grasses of the piney woods, having good fire lanes, or fire lines as we call them, is essential.

Often woods fires will break out when a cold front and its accompanying north wind dry out the ground and grass. There is a long tradition of burning the woods among the folks in western Louisiana’s ‘No Man’s Land.’ It began with the early cattleman and sheepherders burning off the dead grass, believing that new fresh grass was better for their animals.

When the forests were full of longleaf pines, which will survive most woods fires, and few settlements, “burning off the woods” was accepted as a rite of late winter.

However, the reforestation of Louisiana with Loblolly and Slash pines, which will not survive a hot woods fire, meant loss of trees and habitat from fire. For years, our area led the state in woods arson fires. It was as if the old settlers still believed it was their right to burn the woods.

Feuds over hunting leases or grudges led to other fires. Sometimes the fires were accidentally set and spread by a strong wind and low humidity. Regardless of the source, our two most common species of pines are exceptionally vulnerable to fire.

I always worry over fields like the one on the Gravel Pit Road. Once they get tall enough, they can withstand some fires, but in the first five years, a fire will often destroy an entire stand.

As I drive by and examine the fire line, I wonder if they’d plowed a “hundred foot line.” Often to guard against arson fires where the perpetrator would set the fire inside the fire lane, wise timber owners plow an additional line one hundred foot farther into the forest.

This would mean an arson fire would be stopped by the hundred-foot line and not spread to the entire plantation. I sure hope this field of slash pines has one. It provides insurance for the larger part of the field.

I see a spiritual and mental component to the 100-foot line. In our busy lives, we need this guardrail of space and protection for our minds and souls. This fire lane or margin gives us boundaries and space to breathe.

It allows us to control the raging fires that can burn in our lives. I know all about that—I’ve had some arson fires in my own heart—usually self-inflicted.

How do we plow those hundred foot lines?

Be still… I love the words of the shepherd David in Psalms 46:10 “Be still and know that I am God.” It’s both a promise and commandment. Taking time to be still, get quiet and pray and meditate help us as well as protect us. We must build solitude and silence into our lives and guard a time and place for them.

Get outdoors. Wendell Berry made this statement, “The Bible was written to be read outdoors.” There is something about being in nature: a clear blue sky, the wind in the pines, an owl’s call, and a star-filled winter sky with a fingernail moon.

* Readers often comment on one of their favorite passage in The Wayfaring Stranger about Miz Girlie Perkins’ morning time in the woods. Scroll down to for this story.

When I build an outdoor fire—whether it’s in my backyard, the Dakota Black Hills, or under an Africa night sky—and sit around it with a cup of steaming coffee, so many things that weigh me down seem to disappear and fade away. Conversely, the things that really matter—and the things that matter are not things—come clearly into focus.

As we approach another year—the last year of the first decade of the new millennium, I want to purposely plow that hundred-foot line in my life. A safeguard to keep me on the tracks and control the fires that always come into our lives.