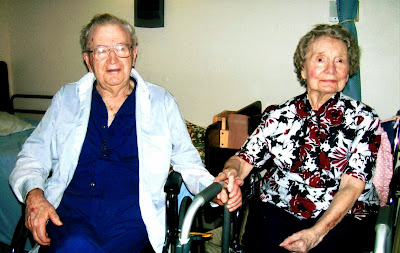 They were always together.

In my fifty years of knowing them, I can seldom recall seeing one without the other. And that’s how Uncle Gordon and Aunt Letha will live on in my heart.

With the recent death of my grandmother’s last living sibling, Letha Reynolds, a marriage bond of 76 years was broken.

On my last visit with them, they laughed as they told of eloping to Lake Charles. By going to the Calcasieu courthouse, they hoped to avoid the nosey eyes and ears of their hometown courthouse in Oberlin.

Uncle Gordon said, “It was December 1932 when we eloped. Arriving at the courthouse in Lake Charles brought an unpleasant surprise—there was a long line of couples snaking out of the clerk of court’s office. Texas had more stringent laws on marrying and most of the waiting couples had crossed the Sabine to get ‘married quickly.’”

With a sparkle in his eye he continued, “I’m sure folks thought we wouldn’t last, but they were wrong.”

The last decade of their marriage was spent in their joint room at Kinder’s nursing home. They tenderly took care of each other and were greatly loved by the staff and residents.

On visiting, I was always amazed how their mannerisms and speech were so similar. I guess three-quarters of a century living together welds two hearts, lives, and even personalities into one.

To me they modeled grace and commitment. They didn’t have to talk about the strength of their marriage. It showed in every action and deed.

In the “lowlands” of temporary things and throwaway relationships, the towering marriage of Gordon and Letha Reynolds looms as Mt. Everest.

Thanks for showing us how to do it, Aunt Letha and Uncle Gordon.

When she died last September, we all worried about Uncle Gordon. He was 98 and now alone—separated from his mate. How would he react to that first anniversary—December 25—spent apart. After seventy-six Christmas Days as man and wife, he would be alone on this one

However, that separation was short. Uncle Gordon followed quickly behind her, dying just before Christmas.

I fully believe they were back together for their 77th anniversary—with many more to come.

A final thought on how they came to “resemble each other.” It was due to their sharing life intimately and with commitment to each other.

It’s the same thing for us in our relationship with Jesus. We should come to “resemble him” as the years roll on. Paul talked about this as “conformed to the image of Christ.*

We’re to “look like Jesus” in how we conduct our lives daily.
I fall so short of this in my own life, but it is the goal of my heart each day.

Uncle Gordon and Aunt Letha resembled Jesus. The Godly way they lived their lives in the small town of Kinder was a witness for Jesus. They both lived that—and finished well.