The Humility of Travel

Travel—especially travel internationally—builds humility. In a foreign land, you’re off your own turf, you’re bad at the language, ignorant of local customs and culture.

You’re dependent on strangers and new friends to lead you around by the hand, keeping you out of trouble.

You’re eating new food and using new manners (eating left-handed in much of the world is taboo.) As you dine, you wonder what it is that you’re really eating and if it will make you sick later.

We ‘uni-lingual’ Americans view ourselves as “world levelers” and the master of all circumstances. Yet you drop one of us in the midst of a foreign country and we’re often at the mercy of a smiling eight-year old who speaks four languages and has mercifully decided to rescue ‘the gringo.’

Our command of the world’s greatest language (Ha!) is useless as we stare at a menu in a rural Chinese province, ask for directions on Honduran highway, or bargain over the price in a Sumatran market.

Our wonderful American dollar is worthless and unknown once you really get off the beaten path. There are no ATMs in the Ethiopian highlands and credit cards are often unusable deep in Africa’s Zululand.

Once we travel outside our “comfort zone,” our new surroundings quickly humble us.
However, learning humility is not a bad thing. As my mother often reminded me, a good dose of humility never hurt anyone.

Well, I’ll close these thoughts because I really have to find a bathroom—or as they say in Spanish “banos.” Residents laugh at the way I say it, (Not one sound is the same in Spanish as in English.), but that’s no big deal: they laugh at my every attempt to be conversant.

Yesterday, I finally located the banos in a restaurant. I carefully examined the ancient blinking neon light that was over the door. Only when I entered did I realize I was in the wrong place. The shoes under the stall doors all belonged to ladies. I sprinted out of there hoping no one saw me. Looking up, I realized the winking light said, “damas” not banos.

I imagined how the headline would’ve read, “Gringo arrested as ‘Peeping Tom’ (or ‘Peeping Tomas’) at local eatery.”

I then found the banos for us callaberos or hombres or whatever you call us.

To read my all-time favorite ‘wrong bathroom’ story, read below. 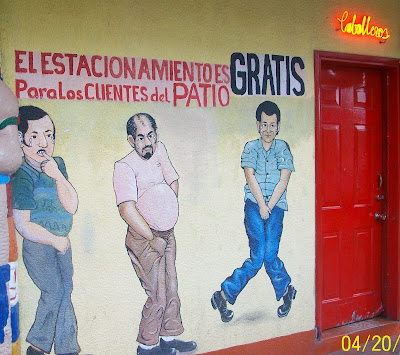 Mural at Tegucigalpa’s El Patio cafe. Notice the neon sign for the callaberos.