“Branding Dogs” A case study on a misunderstanding 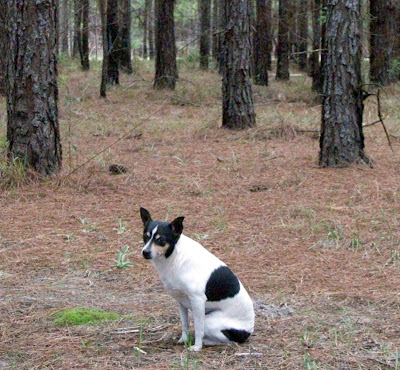 Anyone who knows me is aware of how much I love dogs. One of my older friends always said, “Don’t trust anyone who doesn’t like dogs.”

One of my writing priorities is to include a good dog in every book I write. I don’t just like dogs. I love dogs, especially the two fine dogs who’ve been members of our family for over a decade.

Eddie is a feisty rat terrier who accompanies me for every step of my day.

Ivory, our yellow lab, is simply the best dog I’ve ever owned. Good with kids, always loyal, she has a regal look with her snow-white coat and perpetual smile.

Ivory has graced the cover of three of my books and is extremely well known in our area. She’s in the last days of her life and doesn’t follow me as she once did, and I can’t resist patting her head each time I walk by her. 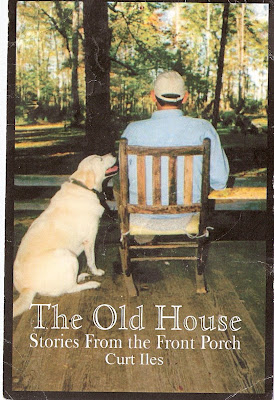 I love my dogs and would never mistreat them, and that’s where my story of branding dogs comes in.

One of my good friends, Monsie Marquez, is a native of Chihuahua, Mexico. Among his many working skills, he’s an excellent welder. When I have a welding project, I call on him.

Because Spanish is his first language (and my last) communication is always a challenge.
When we worked together at Dry Creek Camp, I once sent him for a 4-foot fluorescent bulb and he brought back a can of paint.

When communicating with Monsie on a welding project, I draw a diagram and write out what I need. His wife Sheila then translates my written English into spoken Spanish.

My current manuscript, entitled A Good Place, is set in 1860’s SW Louisiana. It is the sequel to last year’s The Wayfaring Stranger. For all my waiting readers, we hope to have it in your hands by year’s end.

In this new book, Joe Moore and a group of Ten Mile men cut trees along the river, build rafts of the logs, and float the pines down the Calcasieu to the sawmills in Lake Charles. I’ve enjoyed researching, interviewing, and reading about these old time log floats on our area rivers. 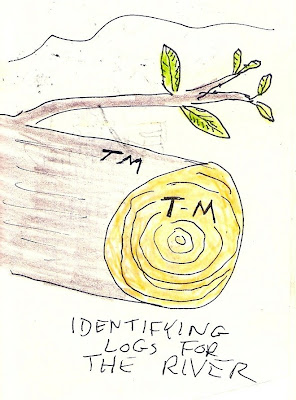 To clearly mark their logs for the sawmills, lumbermen would use a cattle brand to “brand the logs” on the cut ends as well as the bark.

In A Good Place, I named the men’s timber company “The Ten Mile Logging Co.” In my fertile imagination, I thought how neat it would be have a branding iron with “TM” on it. 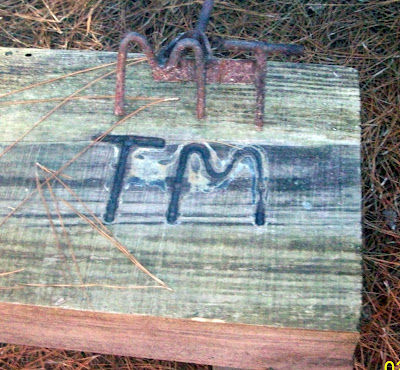 And that is where Monsie came into the story. I sent a drawing with specifications and instructions on what I needed and mailed it to him.

I was gone the afternoon when he brought the finished product by. DeDe told me, “Monsie brought by your branding iron, but seemed upset.”

“What was he upset about?”

“He said something about you were going to be branding dogs with it. He looked puzzedly at Ivory as he said it.”

It was clear that miscommunication had occurred. My handwriting leaves a lot to be desired—too many years of signing hall passes and excuses in the principal’s office ruined what little penmanship I possessed.

I realized this: my ‘l’ must have looked like a‘d’ to Monsie. He thought we were going to be branding dogs, not logs.

Any misunderstanding was my fault, not his.

Poor Monsie, the whole time he was cutting, welding, and making the TM iron, he had a mental picture of little Eddie and old Ivory being branded.

I’ve branded several logs (and boards) with the TM brand, and it works great. However, the SPCA* and PETA* folks don’t need to come see me—I won’t be branding any dogs, just logs.

*Society for Prevention of Cruelty to Animals/People for Ethical Treatment of Animals (in Dry Creek, it’s called, “People Who Eat Tame Animals)

Most problems in the world today—in families and all the way to between countries are the result of miscommunication. Something truly gets lost in the translation—whether it is language, culture, or our own worldview.

And a little ‘l’ becomes a little‘d’ and soon a big problem results.
Conversely, most problems can be both prevented and solved through a little good communication.

Our 2005 trip to tsunami-ravaged Indonesia was evidence of this. Northern Sumatra, the hardest hit area of the country, is fervently Islamic and no westerners had been allowed in for decades.

However, after the tsunami, America aid groups and Christians flooded into the devastated areas. The Achenese people had only heard bad things about Americans from their leaders. Secondly, their attitudes were shaped from American television and movies. (That’s a scary thought).

However post-tsunami, they found Americans to be good, honest, compassionate people.
And we, with our stereotype of every Muslim is a terrorist, found out how many good decent folks are in Indonesia.

A little cross-cultural interaction cleared up a lot.

In the Old Testament, there is a powerful story about miscommunication. In Joshua 22, the Israelites have settled into the Promised Land. Most of them have crossed the Jordan River, but two and a half tribes remained behind across the river.

These two branches of the same family, separated by the geographical bounds of a river, grow apart and have their own way of doing things.

An incident, which time and space will not allow me to delve into, occurs. The eastern tribes build an alta
r/monument to remind the other side of their common devotion to God.

The larger westerners view the monument as a pagan idol and gather their army to cross the Jordan and wage war on their cousins.

Happily, cooler heads prevail and a delegation is sent to find out more about the offending altar. You can read for yourself how the search committee hears the real story and is relieved to take back the news that the monument is not meant to divide, but unite.

This story has a happy conclusion and is a direct reminder for us on the importance of going to the source and finding out the facts before reacting.

I wonder how many wars, divorces, arguments, and broken relationships could have been avoided with just a touch of communication.

Just asking a few questions.
Just listening instead of doing all the talking.
Just someone making sure their “l” is clearly written and means “log” not “dog.”

Think about any misunderstandings you are in the midst of. Unbelievably, most can easily be solved by going to the persons involved and finding out more.

“And the Ruebenites and Gadites gave the altar this name: a Witness Between Us that the Lord is God.” Joshua 22:34 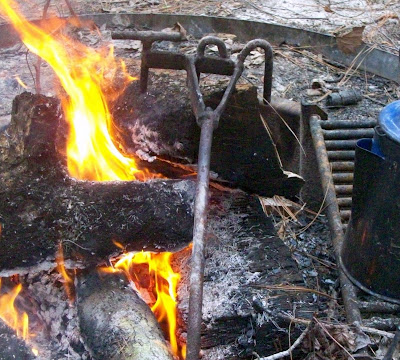 The stories of the bond that developed between the Indonesians and Americans make up the basis of the book, Hearts across the Water, by Curt Iles.

I write to have influence and impact through well-told stories of my Louisiana and African sojourn.
@curtiles
Previous What I Value Most
Next Dogwoods under the Pines