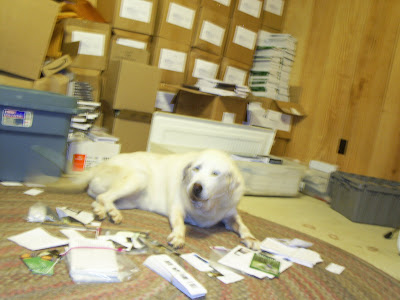 From the Curt Iles book,Hearts across the Water

It’s odd but I will always think of two dogs when I think of the long night that Hurricane Rita struck Dry Creek Camp.

We had 350 people on our grounds. They had been moved and bedded down in our most solid dorms and everyone took enough food and water for the next thirty hours when we were told to expect strong winds.Flashlights and radios were distributed and we locked down and awaited the storm.

DeDe and Terry had gone north to Harrisonburg with all of my immediate family.I went home and double checked our house and yard.Driving back to the camp I looked at my field of young pines and wondered how different they would look by this time tomorrow.

As I left the house to return to the camp, I loaded up one of our most prized possessions- our yellow Labrador, Ivory.She has been my faithful friend for over eight years.If you’ve seen one of my first three books she graces the cover of each one.

Back at the camp office we made a pad for her on the floor.Ivory is very scared of storms.She has pushed her way into the house during loud thunderstorms.At ninety pounds she is hard to drag out when she gets under a table during lightning and thunder.

I commented to everyone that I’d brought Ivory to comfort her during the storm.But I’d really brought her because I wanted her comfort for me.

When I went through a personal storm in my life, Ivory was always there for me.I suffered through a terrible time of deep depression in 2000.During that dark time Ivory always sat by me in the long days and nights of hopelessness.She never gave me a word of advice but simply gave me her full and undivided attention.

God healed me through a wonderful combination of His grace, great doctors, medication, and time.Among that combination of healing things was a dog named Ivory.Animals have the ability to heal and calm.There is something about petting a dog that brings soothing and solace.

It is no coincidence that many therapy centers use pets as part of their rehabilitation.A stroke victim seeking to regain arm movement can pet a dog as part of their therapy. It heals physically as well as emotionally.

Ivory had been that friend of solace in my life. I wanted her company during this stormy night. Our rat terrier, Eddie was left at the house.We’d prepared him a place in the carport garage where he can be far from the storm but still go in and out.I would have liked to have brought Eddie to the camp also but he is still on probation.Every time I’ve ever brought him to the camp he has gotten in some kind of trouble.Last time I brought him for a nighttime work session he hid from me in the office. As I got ready to leave the office, he was no where to be found.I wondered how he had gotten outside.I searched all over the office and drove through the grounds.The next morning I posted “Lost Dog” posters at the store and post office.

After these hours of searching and asking, I discovered him hiding behind the door up on Diane’s couch smiling contentedly at me after a good night’s rest in the comfort of AC.So Eddie is not making the Rita road trip to the camp.I can see the little nervous terrier escaping outside and us hunting for him in the midst of the hurricane.

About 11:30 p.m. we lose our electricity. We communicate on the two-way radios throughout the camp.I stretch out on the office couch in the dark and try to rest.

From time to time I put my hand down to touch Ivory.It is good to have her with me. In spite of the blowing winds and flying debris, she sleeps peacefully.

The first radio SOS call comes after midnight.A frantic voice says, “I’ve got a boy in cabin 7 who has quit breathing and is turning blue.”I pull on my raincoat and rush to the cabin.A teenaged Katrina evacuee is laid out on a dorm porch bench. He is breathing but having a hard time.The wind whips and whistles all around us as he seeks to get his breath.

Our paramedic Shane arrives.I am so thankful that he has been with us during the many medical crises of these past weeks.Lewis is hyperventilating and can’t seem to calm down.Shane works with him and lets us all know that Lewis is evidently having an anxiety attack.I look around at the worried faces of those from the neighboring dorms.

This is a dorm where we had had some suspected drug abuse in the past week.We’d even had the police drug dog come out to inspect our dorms.I wonder if this teen’s problem is related to that.

After the evacuee begins to calm down and breathe better, someone grabs Shane and says, “Come next door, there’s a dog that is really sick.”Shane leaves and later returns muttering, “I can help people but I don’t know much about dogs.”One of the evacuees tells me that this dog is having a hard time with the storm.

I walk next door and meet Sugar.She is a rat terrier, just like Eddie. It is quickly evident from his gray muzzle and few teeth that Sugar is very old.She is held by Mrs. Shirley, age 80, whom we call “Nanny.” 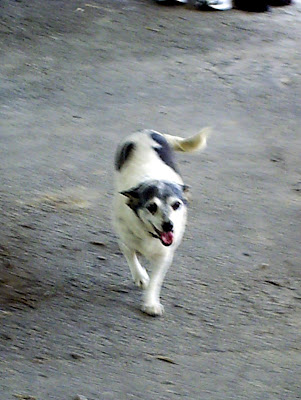 Sugar is in great distress.Her eyes are bulging out in fear and her breathing is labored and loud. Knowing rat terriers and their high strung tendencies I am aware that Sugar is having an anxiety attack of her own.

Nanny holds him closely and talks soothingly to her but to little avail.This dog knows that something very wrong is up with the weather and is instinctively fearful of it.

Standing there as the wind blows the rain sideways on us on the dorm porch, I recall stories of the water buffaloes in Indonesia.Several Indonesia men collaborated the following to me:

When the strong 9.0 earthquake occurred on the morning of December 26, buildings and structures crumbled.There was much damage even far inland from the coast.Fortunately there was little human injury due to the initial earthquake tremors.People ran outside in confusion as they looked around and checked on each other.

It would be fifteen to thirty minutes before the first tsunami wave would arrive. During this interim time of confusion an event occurred that many noticed but only later would understand:The water buffaloes, an important part of rural farming in Asia, broke loose from tethers and pens and maddeningly ran inland for higher ground.

Evidently an instinctive knowledge of the coming wave was sensed by these animals.Ropes and pens that had held the buffaloes secure were snapped and trampled as the bewildered beasts fled.

Looking back at Sugar the rat terrier I am aware that she senses a terrible occurrence just as those water buffaloes did.No soothing words or petting can calm Sugar down.

Over at dorm seven, our hyperventilating evacuee is now settled down so we push everyone back into their dorms and urge them to stay inside.

Going back to the truck someone shouts above the howling wind, “This big dog looks like she is limping because she is hurt.”It is Ivory. She’s just limping along with her arthritic hips.A big smile is on her face as she tromps through the standing water.She must have followed me out of the office.Why she isn’t scared I don’t know.We quickly load her up in the bed of the truck and head back to the office.

The rest of the night is a long story of falling trees, emergency calls to other dorms, and little or no sleep. But as I lay on the couch in the office, I can feel Ivory on the floor beside me. Her snoring and breathing brings a comfort of her own.

The storm’s fury is at its worst just before dawn. Trees have fallen everywhere.Throughout the day hurricane followed by then tropical force winds continue to fell trees.Midmorning, a radio blares out, “Another tree just fell over by the Henhouse on a trailer.”I know it has to be the home of Frank and Janet Bogard.Frank rushes down there to find a big pine on his trailer but it is lodged up against the roof with little damage.It is one more miracle of this storm that none of our buildings are severely damaged.

Later that evening as the winds abate, I walk over to Dorm 7.Everyone is okay but a lady Madeline tells me, “Sugar didn’t make it.”She points to a small fresh grave with a twig-made cross on it.I’m not surprised at Sugar’s death.A heart can only take so much.

I promise them that we will get a small marker placed there.Nanny is sitting there on the porch. She looks much older than even her eighty years belies.Losing your home in an earlier storm is a terrible thing.Losing a beloved pet in another storm, especially a pet of fifteen years, is a great loss not to be underestimated.

The night that Rita came ashore will always be remembered.It will not be forgotten for the people of southwest Louisiana, whether they stayed or went north.The hours of waiting and wondering were tedious. At the camp we will always remember the faces of the evacuees.Full of concern, stress, yet resolution as the storm approached and blew through.

But even after time has faded their faces and I’ve forgotten many of their names, I’ll measure this night by the faces of two dogs: a country yellow lab named Ivory and a New Orleans terrier called Sugar. 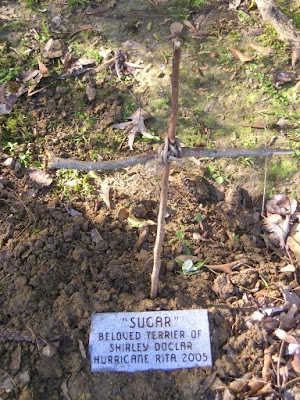 I write to have influence and impact through well-told stories of my Louisiana and African sojourn.
@curtiles
Previous Dogwoods under the Pines
Next A Friend named Ivory