Sketches and Snippets of Africa 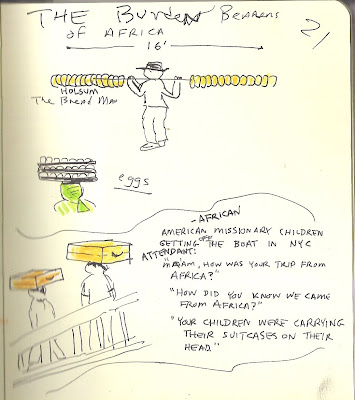 To read the entire “suitcase” story, scroll down to the blue text.

It seems everyone is African is carrying something heavy.
All day.
All of the time.

We saw it all– most of the items carried on the bearer’s head. My favorite was the lady carrying an old Singer sewing machine on her head, arms free. 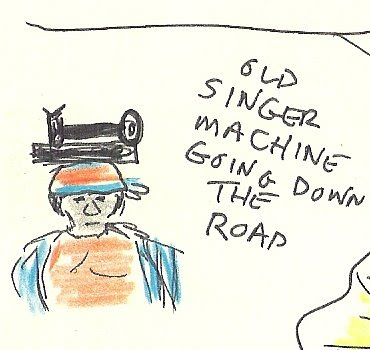 One boy riding a bicycle with probably three dozen eggs balanced on his head.

The Holsum bread man balancing homemade buns on the long stick across his shoulders. 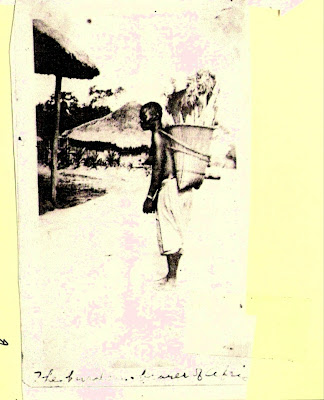 This is a 1921 photo taken by my great great aunt, Eliza Iles Harris. It’s a burden bearer in the Congo. Her descriptive handwriting at the photo bottom states, “The burden bearers of Africa.” 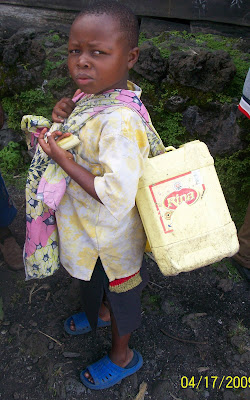 I could tell Aunt Eliza this: they’re still bearing the burden in Congo. This child is on his way to draw water. Water is heavy (8.34 lbs. per gallon) so this little man will be loaded on his way home.

As I watched Africans of all ages struggling under heavy loads, I recalled the words of Jesus in Matthew 11:28:
“Come to me, all you who are weary and burdened, and I will give you rest.”

They need the comfort, rest, and peace of Jesus.
We all need his rest. In America just the same as Africa.

I also reflected on Jesus and the woman at the well in John4.
Jesus’ words “whoever drinks the water I give him will never thirst.”
The Samaritan woman, who hauled water daily from this well, misunderstood and asked, “Sir, give me this water so I won’t . . . have to keep coming here to draw water.”

She was used to carrying heavy loads of water back and forth daily from this well to her home.
Jesus offered her something better than a lifetime of Kentwood Pure Spring water at her house.
He offered her “living water:” His very presence– and rest– in her life.

She accepted, eventually, and left her empty water jug to tell the town about the “man who told me everything I ever did. (that’s a fine statement for her.)

If you’ve never heard Dorothy Coates rendition of “Strange Man,” you must hear this powerful song about the woman at the well meeting Jesus. Click here to hear/see it on YouTube.

That is why we went to the Congo. To tell about Jesus, the living water and encourage the Jesus-followers there to tell their “well story” about encountering Jesus.

We found the people were thirsty.
The were open.
They wanted to hear.

I’ll always recall a Congolese woman who stood in her yard as we were leaving her neighborhood after a long afternoon of home visits.

Even though she spoke in Swahili, I could sense the frustration in her voice.

“Why did you go to these other houses and not come to mine. I want to hear the story, too. Stop and come now.”

That’s why I feel called to go.
To go where there are thirsty people.

This is an anecdotal story from the days when missionaries traveled across the ocean on ships.

An American family serving as missionaries in rural Africa had not been to the States in five years. The mother was so worried as to how her Africanized children would act.

She carefully ordered new clothes from Sears and Roebuck as well as tutoring them daily on how to act and behave.

With the children decked out (pun intended) on the ship, she proudly sent them down the ship’s gangplank as they docked in New York harbor.

As she descended onto the pier, a older steward greeted her. “Ma’am, how was your family’s trip over from Africa?”

She gasped. “How did you know we’ve come from Africa?”

“When your children came down the gangplank with their suitcases on their heads.”

I write to have influence and impact through well-told stories of my Louisiana and African sojourn.
@curtiles
Previous Wet Paint
Next Travel: A Prayer for Packing