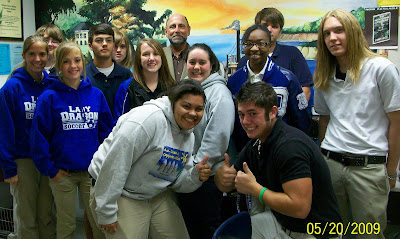 As an author, I’m always involved with three (3) books at a time.

1. Marketing my latest published book. In this case, The Wayfaring Stranger.

2. Finishing up with my latest manuscript. In this case, A Good Place.

3. And beginning on a new novel. In this case, A Spent Bullet.

Today, I was at DeRidder High School with two of Mrs. Melinda Shirley’s English classes.

They worked with me on the back cover text for A Spent Bullet. This was their last full day for the school year, and as you can guess, they were lively (and fun).

Here is what we have as of now:

It’s Fall 1941 and America is only months away from joining a world war that is raging across Europe and the Pacific.

Half a million United States soldiers have descended on western Louisiana’s “No Man’s Land” for a mock battle, the Louisiana Army Maneuvers.

It’s a time of change as the army seeks to mobilize for war and develop new strategies and equipment, such as can a mechanized army move rapidly over rough terrain, or is horse cavalry still valuable.

Equipment, such as new vehicle called the “jeep,” is tested for the first time. Most importantly, leaders and soldiers are tested and names emerge from the maneuvers that soon become household names: Patton, Clark, Bradley, and an unknown colonel named Eisenhower.

In the midst of a nation hurtling toward war, a chance encounter—because of a bullet—leads to the unlikely intertwining of two lives.

Elizabeth Reed and Harry Miller are from different worlds.

She’s a rural Louisiana schoolteacher resigned to a life alone.

He’s a reluctant soldier far from his home of Milwaukee, Wisconsin.

They each have a hidden past that will either draw them together or tear them apart.

Sometimes the hardest person to forgive is yourself.

Like that spent bullet, one’s actions cannot be taken back. When you wish you could, it’s called regret. Regret is a word both Elizabeth and Harry know too well.

Love is never rational, and difficult times of war, uncertainty, and great change sometimes are the catalyst that draws people together. Even the most unlikely couple that have ever met.

What can be cut?

What would you suggest be changed/added/moved/clarified.

Give me your ideas!