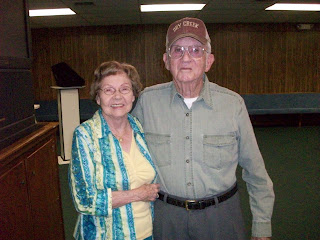 Trelvis and Phil Thomas. The inspiration for
this story from The Wayfaring Stranger.
Miz Girlie’s Prayer Tree

The follow scene from our first novel, The Wayfaring Stranger, tells of Irish immigrant Joe Moore’s arrival in western Louisiana. The Irishman has been befriended by Miz Girlie Perkins, an old Piney Woods widow:

Joe slept each night on the porch. Miz Girlie gave him an old quilt and moss-filled mattress to lie on; aside from the mosquitoes, it was a fine place to sleep.

Every morning about daylight, he’d hear the old lady leave the house. She’d be barefooted and trying to slip out quietly, but invariably he’d hear her footsteps.

After the third day of watching her leave each morning, his curiosity got the best of him. When she returned an hour later through the tall pines, she greeted him as she got to the porch. Joe didn’t know if it was the early morning sunshine or something else—but her face seemed to have a glow to it.

As she ascended the front step, he asked, “Miz Girlie, now I ain’t trying to be nosey or nothing, but, uh, where do you go each morning?”

The old woman smiled. “Baby, you come with me and I’ll show you where I go. It’ll be a sight easier to show it to you than tell you about it.”

They walked out of the yard and into the tall longleaf pines. The shafts of sunlight shone through the tall canopies and Joe Moore was reminded of why he already loved the Louisiana piney woods.

Miz Girlie led him to an old twisted pine that was obviously in its last stages of life. The woodpeckers had drilled holes all up and down its thick trunk. Under the tree was a homemade bench that showed evidence of long use.

“Joe, this here spot was what my momma called her ‘prayer tree.’ It was where she started her day all the years I can remember. It didn’t matter how cold it was—raining or August hot—she came out here every morning.

“Son, it was her place to start the day with the Lord—under this here prayer tree—just her and the Lord, and a cup of coffee. When she passed in the year 1827, I just adopted it as mine. It’s now my prayer tree—a place where I meet every morning with the Lord, and we jes’ visit.” She smiled in a way Joe would always remember, “It’s my place to meet with God.”

Joe had been at Miz Girlie’s for over two weeks now. He decided it was time to go looking around and scout for some land of his own. When he told her of his plans to leave, her disappointment was easy to see. She had come to depend on him and enjoyed his company. However, she understood his need to explore and made him promise to come back.

As Joe walked down the trail away from her house, Miz Girlie Perkins wondered if, and when, she would see Joe Moore again. Author’s Note: Mrs. Trelvis Thomas took me to a tree on her land and showed me the prayer tree used by her mother. Her story became the inspiration for Miz Girlie’s story. I’ve told this story dozens of times and encouraged others to have their own prayer tree.