A horse by any other name…

I’m gathering names for a plow horse in my new novel, A Spent Bullet. See nominations below and read the passage that relates to this horse.

(Curt) My grandfather had two horses: Dallas and Sam. (Dallas is Joe Moore’s horse in The Wayfaring Stranger and he makes an appearance in A Good Place. 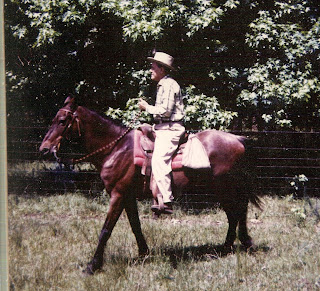 My Papaw, Lloyd Iles, on “Dallas.” Circa 1967 Dry Creek, Louisiana.
“I don’t care how long your grandparents have been gone, you still miss them.”

Interested readers have suggested these names for my horse. Read the passage below and tell me which names fit best.

This is the rough draft passage (I’ve left it rough on purpose. It was written this morning. I’ll insert one of these names.) It is from my new novel, A Spent Bullet, set during the 1941 Louisiana Army Maneuvers.

It is told through the POV (point of view) of Butch Reed, a 17 boy itching to join the military as America nears joining in the European War. His Poppa, a veteran of the Great War (what they called WWII in 1941) objects passionately. They had a ‘knock down drag out’ fight several days before this scene.

This scene from their barn reveals why Poppa was so opposed.

As Butch carried his stool and milk pail from Bessie to Flo, he eyed his father’s meticulous grooming of __________ HORSE NAME NEEDED. Poppa loved all animals, but horses were his favorite. He’d grown up in the horse culture of the piney woods where they were the main form of transportation and work. Horsepower meant something to his father.

“It was the screams of the horses that tortured me the most.” Butch heard Poppa’s words and glanced over thinking he was talking to him.

“I’ve never got their dying screams out of my mind and it’s been a bit over twenty-year.” Poppa said in the same even tone, his eyes on the horse’s flank.

Butch stopped his milking. “Poppa, are you talking to me?”

When his father looked up with misty eyes, Butch saw a stare he’d never seen before. He knew without acknowledgement that the words were directed at, and for, him.

Moving the bucket where the cow wouldn’t kick it over, he walked to the far side of the
HORSE. He knew this was his father’s conversation. His tone revealed it wouldn’t be an argument. Butch also knew he job was simply to listen.
Each stood on one side of the horse as if they needed this physical barrier to break the emotional one between them. Butch began stroking _________’s mane and the horse shivered at the attention of its two owners.
Poppa and Butch had many mutual loves; their love of horses being probably their strongest bond. Neither man looked at the other. Poppa knelt down, checking _____ foreleg. “I’ve always been bothered by the fact that watching a horse die disturbed me more than the death of men next to me.”
“Poppa, you’re talking about the Great War?”

The strong smell of horse, feed, and manure. No answer was needed as Poppa continued. “I was so excited to get out of these woods and go serve my country—to see this big world across the ‘Big Pond.’ Even we they told us about the trenches, the machine guns, the artillery barrage, I wasn’t that scared.

“But when we marched through the connecting trench to the front lines and I heard the first horse screaming, I knew I was in a bad place. I’d been around horses like ol ____ here for all of my life, but I’d never heard such terror-filled sounds. I wasn’t even sure what it was at first.”

“The horse was pulling an ammunition cart when a shell struck nearby. The explosion had knocked it and the cart to the ground; shrapnel had cut it up badly. It lay there. The only word I know to describe it is ‘screaming.’ It was screaming in pain and terror.

“No one could go to it because of the ongoing artillery barrage. Finally a muddy veteran in the main trench sighted his Enfield on the twisting head and with two shots put it out of its misery.

That ended the horse’s tortured pain, but I’ve never got it out of my mind. I realized that day the cruelty of men against men, and how we’ll take animals God made and subject them to that same cruelty.”

“Did you see many men die, Poppa?”
He looked up at me. “Everyday. And everyday I expected to be the next one.”

He resumed his work on ________ ‘s leg. “I can’t talk about it: the gas attacks, laying flat in the mud full of fear as a box barrage neared your location, the lice, the mud, watching men beside you die both quickly and in agony.”

It was the most Butch had ever heard his father talk about the war. The look on Poppa’s face made him understand why. “Butch, I’m still bothered by how the sound of a dying horse on my first day on the front lines affected me way more than the men I saw die daily after that.”
“It’s because of how you—how we—love horses, Poppa.”

“Yeah, but I should love people a lot more.”

“You do. It’s just different.” Butch hesitated after saying this. He was commenting on something he didn’t have the same degree of experience as his father.

Poppa stood to his full height, bright _____ eyes staring across the horse’s flank.
“Can’t you understand why I don’t want you as part of any war?”

“I can, but…”
Poppa, cut him off. “And can’t you understand, just a little, why folks like me agree with Lindbergh?* We’ve been to Europe and seen firsthand what war is like. Because of that, it’s to be avoided whenever possible.”

A day before, Butch would’ve argued but now he softly said it, “But what if that war can’t be avoided?”

“Poppa, I’ve nearly made up my mind to join up. They’re gonna draft me sooner or later anyway. I thought I’d just beat them to the punch.”

“I understand although I don’t want to hear I was about your same age in ’16 when I signed up. I won’t stop you—I can’t stop you, but I would like to suggest something. I’ll call it a ‘compromise’.”

“Let’s go to the house for a cup of your momma’s coffee and talk about it on the porch.”

Father and son walked side by side from the barn, with only a milk bucket now between them. They were silent; the only sound being the contented neighing of a good plow horse named __________ back in the barn.

My mind is spinning with the compromise Poppa’s going to offer. What’s your idea?

* Charles A. Lindbergh was America’s greatest hero of this time. He was as famous as either Michael (Jordan or Jackson), Bill Gates, or Neil Armstrong. He passionately opposed American involvement in the European war as spokesman for the Isolationists “America First” group. This made him a divisive figure and enemy of FDR’s administration.

When the war started, Lindbergh served as a pilot in the Pacific.