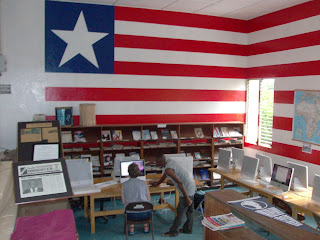 This is a press release from Ricks Institute in Liberia. This is the school we worked with in July.

The iMacs in the Ricks Library. The Liberian flag is shown in the background.

The new i-Mac computers were a gift from the First Baptist Church of San Angelo, Texas and an anonymous donor from the United States. The donation was coordinated through the kind heart of Mr. J. H. Law, Site Coordinator of Christian Men Job Corp, San Angelo, TX. After two short-term visits to Ricks Institute, where he coordinated in-service training with teachers and students, Mr. Law became motivated by the challenges and possibilities at the Baptist related school. Mr. Law shared his experience, and the various needs at the school, with several of his friends and colleagues.

The 15 computers, one network wireless printer and accessories, valued at US$27,000, which were installed through the technical assistance of friends from Passport Camps (Birmingham, AL) and Brookstone School (Columbus, GA) in May 2009, were officially presented to the Ricks community the second week of the 2009-2010 academic year.

Making the presentation at the regular morning assembly, the Principal and Chief Administrative Officer reminded the Ricks community that, “these gifts are evidence that so many friends of Ricks want you to have access to relevant educational means even in midst of our post-war conditions.”

In a statement associated with the donation of the i-Mac computers, Mr. J. H. Law wrote, “If Liberia is the phoenix of Africa, then Ricks Institute must be the phoenix of Liberia. A civil war, which devastated Liberia, wrecked havoc at Ricks Institute as well. Under the leadership of Dr. Menjay, Ricks Institute is rising from the ashes of war to point the way forward to a new day in Liberia.” Mr. Law, a member of the First Baptist Church of San Angelo, TX, further stated, “During my visit to Ricks Institute in 2008, Dr. Menjay suggested that a computer lab would make it possible for students there to develop computer knowledge and skills which are critical in the 21st century. My wife and I are gratified to know that along with a number of other people we have been able to contribute to making the dream of a computer lab become a reality. “

The second grade class, taught by a United States volunteer teacher, was the first set of students who begin to use the newly installed computers. For 100% of the 2nd graders, it was their first time using a computer. A 12th grader, who has less than seven months to graduate, confessed that this was his very first attempt using a computer. Dr. Menjay expressed his sincere thanks and appreciation to Mr. Law and the donors for this applicable 21st century gift, which will provide effective and efficient education for the Ricks community. “This gift made us special and placed us on the cutting edge at Ricks. They were not used computers. They were brand new, first class, apple computers.”

Since 2008, the main school building on Ricks campus has become a hotspot, where those with laptops can enjoy the internet, using the schools free wireless access.

About Ricks: Ricks Institute (K-12), established in 1887, is a dynamic and comprehensive learning center that attracts students from all over Liberia and beyond. Since 2006, the institution remains the only private school in Liberia offering free primary education to its students. As a community and nationally recognized school in Liberia, 40% of its 607 students are residential students. Additionally, it operates a free Accelerated Learning Program in the afternoon with 125 (over aged) students. The school is located in Virginia, Liberia on some 1200 acres of land. For more information, visit www.ricksonline.org.

I write to have influence and impact through well-told stories of my Louisiana and African sojourn.
@curtiles
Previous 3 A.M., 40 Miles, 4 Trucks, 2 Cups Of Coffee
Next Dolly Is The Horse's Name