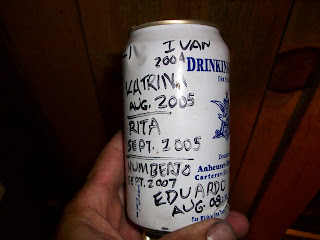 I know it’s not officially over until November 30, but it’s safe to say this will be a below normal season, especially for our battered Gulf Coast.

Shown are two of my favorite hurricane items. One is my can of Baptist Beer. I write the name of every hurricane that affects our area on this 2005 souvenir. You can read the fun story about what Baptist Beer is later in this blog.

At the end of this posting is the short video on the book, “Everything Good About Hurricanes.” The book shown is a special prize of mine. You’ll laugh and understand why after viewing the video.

Let’s thank God for a quiet hurricane season. It’s a blessing. Many have asked Him for this so let’s “follow up” with sincere gratitude.

Tim Tebow when he helped dismantle my LSU Tigers last Saturday night sported eye black that said, “I Thess. 5:18” It’s a neat verse, “In everything give thanks…”

Let’s be thankful for the things that don’t happen. Like hurricanes.

To see the video clip on the book: “Everything Good about Hurricanes”
click here to go to You Tube at http://www.youtube.com/watch?v=_qfoLUNKOWg

It’s lunchtime at The City of Hope. It is the first Saturday after Katrina. Our evacuees have been with us for six days now and we are getting to know each other well.

The watchword of the latter part of the week has been, “When is FEMA coming? When will we see the Red Cross?” There is an undercut of tension that our shelter, being in an extremely rural location and not being an official Red Cross shelter, will be passed over and forgotten about.

In the middle of lunch someone cries out, “The Red Cross is here!” Outside the east window a red and white van pulls up. Three workers get out and are greeted by evacuees. Everyone quickly discovers they’ve not come with $1500 debit cards but rather supplies of food and water. Still they are greeted with warm smiles and handshakes.

I’ve been amazed all week that whenever any official comes, even if they have no pertinent information, they are greeted warmly. For all of the belly-aching about FEMA and the Red Cross, individuals from these groups are received respectfully. Most of them quickly tell the assembled crowds that they are “worker bees” or “lower echelon” and have no big news. But it is still reassuring to see someone in uniform. Another thing I notice is that every worker I’ve met from these groups has been extremely helpful and concerned.

I meet the Red Cross workers and then return to my meal. Suddenly someone charges over to my table, “Bro. Curt did you know they’re bringing in cases of Budweiser water?” Someone grabs a six-pack off the dolly and delivers it to my table. Sure enough the white can is labeled “Drinking Water; packaged by Aeunhueser Busch, Cartersville, GA.”

I don’t know whether to laugh or get mad. They quickly reverse the unloading of the high stack of Budweiser water and reload it for destinations where Baptists aren’t in charge. Later I find out they inadvertently left two cases behind. I quickly commandeer them and begin planning some fun with them.

We Baptists have a well-deserved reputation for being teetotalers when it comes to alcohol. We like to say we are dry. In Beauregard Parish there is only one small area where alcohol is sold. In fact we are presently in the beginning stages of a liquor election created by a loophole as decided by the state supreme court.

I’m against the sale of alcohol for a very simple reason: I’ve seen it hurt too many families. I’ve helped bury way too many young people whose lives were snuffed out by someone driving while intoxicated. I’ve never seen alcohol do any good but I’ve seen it destroy many a man, woman, and family.

In spite of this, I still have a sense of humor about things and these Budweiser waters are passed out to every Baptist preacher I know when they drop by the camp. We have lots of fun with it.

It brings me back to the allegorical story I once read in the newspaper. It seemed in Texas they were having lots of trouble with the Johnson grass in their crops. The local sheriff had confiscated a huge shipment of moonshine whiskey. He came up with a novel way to dispose of the moonshine and eradicate the Johnson grass. He simply poured the whiskey on the Johnson grass and the Baptists ate it down to the roots.

Being a Baptist I’m used to being the butt of jokes like that and can laugh as loud as anyone.

My father-in-law, Herbert Terry, has a friend named David Patton. Although Mr. Patton, a former state legislator, is well known in north central La, his dog “Bo” is better known than he is.

My father in law told of going to David Patton’s house and the dog being told, “Bo, Mr. Terry has come to go hunting, go get him some boots.” Soon the dog obediently returned with a pair of boots in his mouth. Then the dog was instructed, “Mr. Terry doesn’t have a gun, go fetch him a gun.” Sure enough Bo came back dragging a gun in a carrying case.

Then he told him, “Bo, it’s hot today– go get Mr. Terry something to drink.” Quickly old Bo comes back with a can of beer in his mouth. Mr. Patton then scolded the dog, “Bad dog, you know Mr. Terry’s one of those Baptists. Now take that back.” With that the dog left and returned, this time with a can of Diet Coke.

I didn’t see this but my father in law is a good man and I know if he said it, it happened. In fact I’m so sure of it, I’ll bet you a case of Baptist beer it happened.

P.S. Another new story from my current research (1941 La. Maneuvers in our area.) A customer from outside our area came to DeRidder’s Royal Cafe during 1941. He asked the waitress for a “shrimp cocktail” with his meal and she curtly answered, “I’ll have you know Beauregard Parish is dry and we don’t serve no alcohol here.”

As a fiction writer, I’m amazed daily at how it is impossible to make up anything better than the truth.

(Below) My can of Baptist Beer, side view showing 2008 hurricanes. Lord willing, I won’t be adding to the names in 2009. 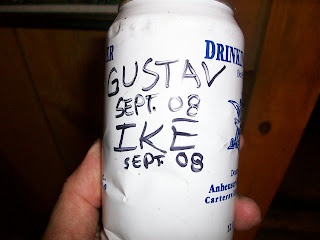 I write to have influence and impact through well-told stories of my Louisiana and African sojourn.
@curtiles
Previous More On Planning and Planting
Next Kojak The Fireman