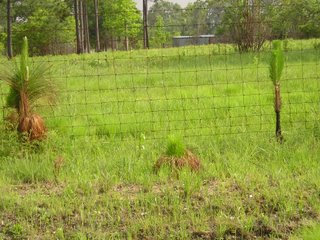 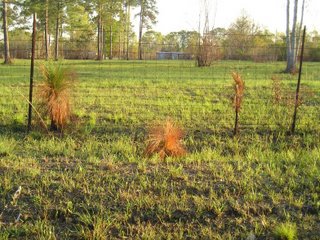 Burned, yet Blessed, by the Fire

This is one of my reader’s favorites. The original story is in Wind in the Pines.

This updated version will be in my new book, The Mockingbird’s Song. (It is due out in early 2007.)

The once green pine forest, now charred and blackened, lifelessly stares back at me. As far as I can see to the west of the highway, sad black lines of burned pine trees extend in the distance. It seems as if another stand of pines has succumbed to a late winter forest fire.

Normally in February, after several months of killing frosts, the piney woods of Louisiana are often be the scene of numerous forest fires. Whatever the source of these fires, whether control burning or woods arson, the result is often the same: Smaller trees, grasses, and shrubs all killed by the hot wind-driven fire.
Surveying the charcoal-colored field I before me, I realize that this is a stand of Longleaf Pines. Although seemingly lifelessly charred by the fire, the resilience of this species will reveal itself in the coming weeks as spring arrives.

There is an amazing story behind the effect of fire on Longleaf Pines. The history of the Longleaf Pine, Pinus Palustrus must be understood to truly grasp this story. This native tree, also called the yellow pine, ruled the virgin forests of the South from Virginia to East Texas. Because of its hardiness, adaptability, and ability to grow in shallow, sandy soils, it covered much of the acreage of the southern United States

These beautiful pines existed in vast tracts called pine savannahs. These were upland areas where the pines were scattered throughout grassy areas. Because of the tall grasses, fire was always a reality during the dead of winter, when frost had killed the surrounding vegetation. The first to burn the woods were the native Indians. They burned the savannahs to be able to see game animals better and lessen the chance of their enemies hiding nearby. Later, white settlers burned these same grasslands to make better grazing for their cattle and sheep, as well as to kill pests such as redbugs and ticks.

No matter the reason for these fires, the Longleaf Pines continued to grow. Whereas non-native pines, such as Slash and Loblolly, are easily killed by wildfire, the Longleaf seems to thrive because of fire.

Longleaf Pine grows much slower than the other pine species. Because of that reason, most replanting of pines today uses the faster growing non-native species mentioned above.

The early stage of a Longleaf Pine is called the grassy stage. The tree has hardly any trunk above ground and the long green needles more nearly resemble a wild type of grass than a tree. The pine will stay in this “long straw” stage indefinitely until a fire sweeps through.

During this stage, the tree will remain dormant in growth due to what is called Brown Spot Needle Blight. This fungus attacks the top growth area of the young pine, called the candle bulb.

The combination of the tall grass around the tree competing for sunshine and nutrients, and the Needle Blight keeps the young pine tree from growing upward.
The surrounding grass keeps the area moist, which is the condition the Needle Blight needs to attack the small pine’s topmost candle bulb. The result is that the Longleaf sapling will stay in this grassy stage indefinitely – still alive, but never growing upward.

A Longleaf Pine will never reach its potential until a fire rushes through, killing the grass and other trees competing with it for water, sunlight, and nutrients. Additionally, the Brown Spot Needle Blight is killed by the heat of the fire.
Due to its thick bark, this species can withstand most hot forest fires. Unfettered by the competing grasses and trees and free from the stunting blight, the tree is ready to grow. The bushy Longleaf Pine is freed by the fire to grow to its intended height and size – and doesn’t a Longleaf grow tall and beautiful!
One of the reasons I love these pines is because of their resilience. In the succeeding weeks driving along the highway, I inspect the field to see any new growth. Finally, in March the tops of the trees begin to show new green growth. Soon healthy candle bulbs, some nearly a foot long, begin to reach upwards. Over the coming weeks and months, this candle bulb turns into a tree trunk and sprouts fresh pine straw, and this once-dwarfed Longleaf Pine will never again have to compete with the grass for water, sunlight or food.

Knowing about this species, I also know that this same growth is taking place underground. If you’ve ever seen the exposed tap root of a Longleaf Pine, you know that it has a deep strong foundation for growth. This deep root enabled most of these pines to endure the strong winds of Hurricane Rita in 2005.
There is a spiritual application from the story about these pines. Just as these pines need the fire to prod their growth, in our lives we need the fire of trials and challenges to grow into the person God wants us to be. None of us desire these times of heat and pain, but God uses these times for the shaping of our heart for maximum growth.

During these fiery times, we will often wonder where God is. Even though it is often difficult to feel His close presence in the fire, He is beside us as never before. It is good to be reminded of his faithfulness and steadfastness.

We see a memorable example of this “burned yet blessed” experience in the wonderful Old Testament story of Shadrach, Meshach, and Abednego. The book of Daniel tells of these three young men being thrown into the fiery furnace for refusing to bow to the idolatry of the Babylonian king, Nebuchadnezzar.
The fire was so hot that it killed the soldiers tossing them into this furnace. Our three heroes were thrown in tightly bound, as good as dead. In a few minutes the King and his advisors were amazed to see them walking around in the fire. His words tell the story better than we ever could:
“Look!” he answered, “I see four men loose, walking in the midst of the fire; and they are not hurt, and the form of the fourth is like the Son of God.” (Daniel 3:25)
In the fire, God did not desert them but showed up personally to stand by them. Also, in this fire “what bound them” was burned off. Just like the Longleaf’s fungus blight was burned off, this hot fire burned off what was holding our heroes back.
We will all experience being in the fire at various times in our lives. None of us are exempt. Your fire will probably be much different from mine. Regardless, God wants to use this fire to shape you and use you.

Throughout history the people God has used the most have been those who had worked through difficult circumstances to grow to their “maximum” height for use by Him.

Why God chooses to deliver us through the fire instead of from it is a secret that only He can reveal. I’ve learned that He can be trusted just as reliably in the fire as when we are in the cool and refreshing shade of an easy stretch of life.

Are you in the fire? If so, remember that God has not abandoned you. Just as Shadrach and his two partners were joined by God in the Babylonian fire, you are not alone.

And you can rest assured that your faithful Father is using this fiery trial to shape you and use you as never before.

When you see one of these tall longleaf pine towering sixty or seventy feet above the ground, remember that its height and strength are due to being burned, yet blessed, by the fire.