Chapter 1 of A Good Place 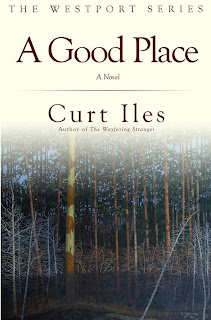 Scroll down to read Chapter 1.

Simply send your mailing address/number of books and how you want them signed. We’ll invoice you with the order. Books are $15.00 each with $5.00 shipping per order.)

WHEN Daddy shoved me under the table, I knew this wasn’t
just any storm.

As the crow flies, our Louisiana log cabin was a hundred miles
from the Gulf of Mexico. When this day had quietly begun, no
one had any idea a hurricane was churning ashore. Here we were
less than twelve hours later, however, riding it out under our
kitchen table.

Watching Momma trying in vain to keep the lantern lit,
a knot of fear as big as a turnip formed in my throat. Giving
up on the lantern, she turned to Daddy. “This ain’t no normal
thunderstorm. Do you think . . .?”

She couldn’t, or wouldn’t, say the word. In her eyes was
something I’d never seen before—raw fear. Her hand trembled as
she placed it on my knee. Momma’s obvious alarm moved Daddy
into action, and he said the word she’d couldn’t. “Hurricane—this
has to be a hurricane.”

Crawling from under the table, he said to her, “Eliza, get the
windows covered best you can.” Then he grabbed me. “Mayo,
come with me to get the animals in.”

On that August evening in 1862, I was nearly 12 and didn’t
have enough sense to realize the danger, so I eagerly joined him.
As soon as we cleared the lee of the house, the wind whipped
us, tearing Daddy’s hat right off his head. He ran toward the barn,
not even looking back as the lightning outlined his silhouette
with each strike. Reaching the building and pulling me inside, he
said, “Pen the animals, and throw some hay in their troughs.”

He hurried out, leaving me alone in the building’s growing
darkness with only whimpering animals. I found our horse,
Dallas, and began stroking his mane. He was snorting, pawing,
and shaking as bad as Momma, sensing some kind of evil blowing
in that howling wind.

Daddy stuck his head back in, “Hurry, it ain’t safe. Let’s git.”
Hunkered down, we ran by our outbuildings, stopping only to
bolt the smokehouse and adjacent kitchen.

I cowered under the walkway that connected our kitchen and
house, holding onto a post. With my other hand, I covered my
head as debris whizzed by.

A flying object struck Daddy square in the back, causing
him to stumble. He turned and shouted, “Whoa! Let’s go.”
Scampering onto the porch, I heard the first tree crash, causing
both the house and my heart to shudder.

As we went through the door, my dog, Bo, brushed straight
past me and hunkered down under the table with my mother and
sister, Colleen. Momma, who was in the family way, squatted on
the dirt floor, still fiddling with the flickering lantern.

“There ain’t no use fooling with that thing,” Daddy said,

“There’s too much wind blowing through the cracks for it to stay
lit.”

Holding out the cypress shingle that’d struck him in the back,
he knelt by Momma. Frowning and rubbing the whelp on his
back, he whispered, “It’s real bad out there.”

“Honey, are—are you all right?” she asked.

Before he could answer, another crashing tree jarred our
house and Colleen cried, “Daddy, wh—what’s happening? Is
this the war?” Colleen, half my age, had a fear that the ongoing
War Between the States was coming to kill us. The noise
outside assured her that its cannons had finally reached Western
Louisiana.

Another crashing tree, this one even closer, caused her to
scream, “It’s a big gun.”

“No, Child, that was a tree falling.” Momma said as she
watched Daddy at the window peering out. I was watching him
too, and knew one thing for sure, my father would get us through
this.

“Eliza, kids, listen to me,” Daddy said in a steady voice. With
the howling wind outside, we had to lean in real close, but when
he spoke, his words seemed to drown out the storm. “Now, this
has gotta be a hurricane. I don’t know how long it’ll last, but we’re
gonna be all right ‘cause we’re together. We’ll trust the Lord to
get us through. This may’ve caught us flat-footed, but we’ll get
through it together.”

We’ll get through it together. That was all I wanted to hear,
and it was what I needed to hear: Together.

“Daddy, are we gonna blow away?” Colleen asked. I glanced
up at our creaking roof, wondering the same thing.

Before he could answer, Momma pulled my sister closer,
“Baby, this house was built ‘horse high, bull tough, and pig tight,’
by your daddy and it’ll stand up to anything any storm throws at
it.”

Colleen nervously burst out giggling at Momma’s saying,
causing us all to laugh in spite of our fear. However, our smiles
soon faded as the storm intensified and the rafters lifted and
shuddered with every strong gust.

“I feel—I feel so helpless,” Momma said, holding Colleen
closer.
Daddy repeated, “We will get through this. Together, we can
do it.”

At that moment, I hoped he was right.
Sitting under the table as the wind howled, it was hard to
believe this day had started so quietly. Looking back over it, we’d
missed several signs—omens of the approaching storm.
#
The coming storm’s first clue had occurred earlier that
morning when Daddy had met me at the barn for chores. “Listen,
Mayo.”
“To what?”

“It’s too quiet—even the crickets have stopped chirping.”
Daddy was almost whispering.

“It’s Irish for ‘Red as blood.’ Look at the sun—where I grew
up along the Irish coast, the sailors always said, ‘Red sun at night,
sailor’s delight. Red sun at mornin’, sailor take warnin’.”
Shrugging his shoulders, he sniffed the air and added, “Air
even smells funny. Gives me the doggone willies.”

As we’d returned to the house for breakfast, I’d noticed Bo
under the steps and called him out. He wouldn’t budge, even
when I whistled and hollered, “Hunt ‘em up, Bo.”
Another omen missed.

By midday, the morning’s clear weather was long gone—
replaced by dark clouds rolling northward on a gusty wind.
Darkness came early, seemingly snuffed out by the rising wind,
which began driving the rain through the cracks in the walls.
So, less than twelve hours after a clear sunrise and promising
day, we were huddled under the table as our whole lives were
being blown away.

From time to time, Daddy crawled out and peered out the
window. Flashes of lightning lit the worry on his face as he
whispered, “Well, this ain’t my first storm.”

I knew he was right. He’d come to Louisiana fourteen years
ago as a lonely teenager at the end of a long journey, from another
land of storms—Ireland.

Here in this area called “No Man’s Land,” he’d grown into a
man, met and married my part-Indian mother, and made these
piney woods his home. He even named the hill where he built
our house “Westport” after his hometown in Ireland, laughingly
saying, “This spot’s the closest thing I’ve seen to a mountain in
Louisiana.”

Daddy loved Louisiana’s clear creeks, tall trees, and the
freedom it offered—and, until the day he died, referred to it as “a
good place to be.”

Watching him made me wonder if he thought of it as a good
place at this moment. Another crash outside jolted the whole
house, prompting Momma’s warning, “Joe Moore, get back under
here.”

He hadn’t been back under the table ten seconds, when a
huge oak tree smashed through the cabin wall right where he’d
stood. As wood splintered and contents of the shelves crashed to
the floor, we hunkered tighter under the table.

I write to have influence and impact through well-told stories of my Louisiana and African sojourn.
@curtiles
Previous Forgiveness: Build A Bridge And Get Over It
Next “Snake-Popping” An excerpt from “A Good Place.”