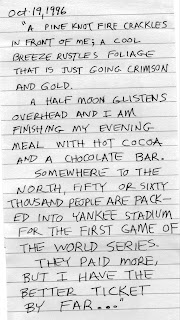 “Come to the woods, for here is rest.”
-John Muir
October 19, 1996
“A pine knot fire crackles in front of me; a cool breeze rustles foliage that is just going crimson and gold.

A half moon glistens overhead and I am finishing my evening meal with hot cocoa and a chocolate bar.

Somewhere to the north, fifty to sixty thousand people are packed into Yankee Stadium for the first game of the World Series.

They paid more, but I have the better seat by far.”

-Copied from a trail journal at Blue Mountain Shelter

on the Ouachita Trail in Central Arkansas.

I love the fine prose written by that unnamed hiker in Arkansas. As you’ve probably noticed many of my stories relate to the outdoors and nature. Please excuse me if I strike that “one note song” pretty often.

It’s just that out in the woods is when I feel closest to God. There is something about being among nature that causes even a non-believer to think that there is too much order for this to be by accident. When I’m out in the outdoors walking and listening, stories of nature and our Creator just seem to come.

Last spring when it was still cool and the mosquitoes, redbugs, and ticks had not yet become a nuisance, I was out in my own woods on a late evening walk. As I approached Crooked Bayou, the stream along which my family’s homestead, I sat down to watch the approaching darkness in the swamp. It’s quiet and seems as if the whole world has taken a vow of silence as the night comes on.

Suddenly a far off owl calls.

Sitting on the creek bank, I cup my hands over my mouth and do my best owl imitation. I’m happily surprised when my call is returned by the owl. We continue our “conversation” and soon his call comes closer and I know he is coming to investigate who the trespasser is on his personal property.

To the west, deeper in the swamp, another owl answers. We now have owls “in stereo.” With each series of hoots, the first owl is getting closer to where I’m sitting. The owl behind me to the west is still calling but has not changed its location.

When my owl friend hoots again, he is very close to my spot. I strain my eyes looking up in the surrounding beech trees to catch a glimpse of him. I know the direction he seems to be coming from, but I cannot spot him. My years of listening to owls have taught me that they have an uncanny way of seeming throwing their voice.

Finally, the owl flies into the tree directly over my head. An owl in flight surprises you with their broad wingspan. They are bigger than they seem when seen sitting on a limb.

There is still enough light to see the owl’s silhouette. I sit quietly not making any move or sound that would scare him away. The owl and his partner to the west continue their calling back and forth.

Yes, just like the unknown hiker from that Arkansas shelter on that cool October night, I also have “the best seat in the house.” I’ve got a front row box seat for the evening hoot owl concert.

As the dueling owls continue their chatting, I detect a more excitable song on the end of their calls. Dr. Lowery, in Louisiana Birds states, “…hoots are followed by a long drawn out weird scream that is enough to chill the bones of the uninitiated.”

I agree about the spookiness of this scream. I don’t know exactly what it means – whether it is a challenge to fight, or an invitation to visit. Their mocking spooky calls end with my nearby owl flying toward the west and the other owl flying to meet him.

It’s much darker now and I cross a small log across the creek, headed back from the swamp to higher ground and my truck. It’s a good feeling being out in the woods. No time schedule, no interruptions… just having the best seat in the house – a front row seat at the evening hoot owl concert. The following is from a January 2008 letter by Ryan Collie, a US Marine serving in Iraq.  Ryan wrote to his mother:

I wanted to close this letter by sharing a story with you that Bro. Curt wrote in one of his books.  It’s called “The Best Seat in the House.”

The story was of a hiking trip he took on the Ouachita Trail in Central Arkansas.  During the hike he stopped at one of the shelters to take a breather and shared a story from a trail journal. The entry was about a man missing the first game of the World Series but having “the best seat in the house” in the mountains.

“The night I read that story, I saw one of the most beautiful Iraqi sunsets of my life and realized that I too, for once, had ‘The Best Seat in the House.” And as much as I’ve missed home, I’ve enjoyed every second here.  After all, everyone at home was probably doing the same old things they do every day, and here I am getting a chance to see a sunset I might have never seen that was probably ‘rained out’ at home.

From the Curt Iles books,  Deep Roots and Stories from the Creekbank.