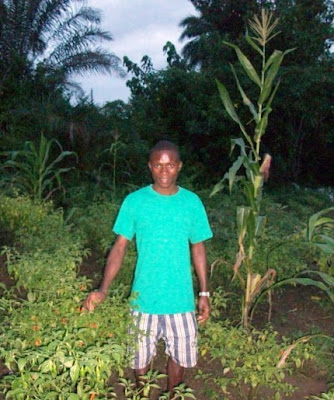 Marcus and his Garden

President Obama’s weekend visit to West Africa was big news inLiberia. We only heard sound bites from the BBC radio as we rode in a vehicle.

Our Liberian friends told about the president’s words including phrases like:

“We must start from the simple premise thatAfrica’s future is up to Africans.”

To the youth, who make up the majority of the population, he stated,

“You have the power to hold your leaders accountable, and to build institutions that serve the people.

As I heard these words, I thought about Marcus’ garden.

Marcus is our “house host” atRicksSchool. His work-study program is to take care of the guesthouse and visitors. He does it with a passion and joy that quickly catches your attention.

He took me to his garden. It is a patch of corn, peppers, cassava (a root crop similar to sweet potatoes) okra, and beans. Beaming, he said, “I can probably sell my crop for two—even three American dollars and use it to get ahead.

Marcus, age 18, is basically an orphan of the civil war that rages for two decades. He came to Ricks and would not leave, serving as a volunteer and living in an empty dorm.

He was later admitted toRicksSchoolwhere his tuition is paid by an American he “does not know.” He is ninth grader due to the years “stolen by the locusts” and working hard to catch up academically. With his attitude and commitment, there is no doubt he will.

He, and his garden, are symbols of the future ofAfrica. A young person with a vision and drive to move forward, anchored in a deep faith in God, realizing his gaining a good education is the key to a better life.

From my vantage point, the crop looks like it’s growing well.

P.S.Ricks is regarded as the “best school inLiberia.”Its dedicated teachers and hungry students are wonderful to know.

Scholarships for needy students ($750 US dollars per semester)