Chapter 1
A Good Place begins with a hurricane.

My experience with riding out Hurricane Rita in September 2005 led to the writing of this chapter. I was in charge of a camp full of 300 evacuees on the night Rita moved in from the Gulf. Even though Dry Creek is nearly 100 miles inland, the storm was fierce. Just like Mayo and his family, the storm during the night only seemed to intensify the feeling of dread and destruction. 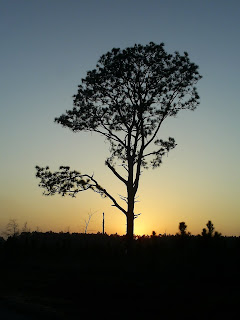 This “Landmark Pine” on the Longville Gravel Pit road lost limbs during Hurricane Rita but still stands tall and proud. It is symbolic of the family strength of the Moore family during the hurricane and in the hard days and years that followed.

I’ll never forget driving through our community the next morning and viewing the destruction: leaves and debris piled on the roads, downed trees and power lines everywhere. It is still something that folks in our neck of the woods discuss often. A true life changing event.

I thought about the surprise of a hurricane in the 19th century. No way to know that the first raindrops and wind are part of a destructive storm moving inland.

Two surprise storms have always intrigued me. The Galveston Texas storm of 1900 killed over 6000 people on the island. The legend tells of a doctor who drove up and down the crowded beaches in his carriage, warning of a coming storm. (He had a barometer and knew from the steady drop in air pressure that a storm was afoot.)

In 1918 a surprise storm blew in over SW Louisiana taking probably the same path as our fictitious 1852 storm does in A Good Place. The 1918 storm destroyed Lake Charles as well as a nearby Army Air Base. Dry Creek historian Frank Miller related of the miles of virgin longleaf pine laid flat by the hurricane. (This was the decade before all of the pines were cut in the timber boom that changed the face of our area.)

Even though it wasn’t a total surprise, Hurricane Audry (June 1957) intensified quickly and sped up as it came ashore, trapping thousands of people in Cameron Parish, south of Lake Charles. Hundreds died and it still affects the psyche of folks in South Louisiana. I have many friends whose families lost loved ones in Audry.

I was one year old when Audry hit and my mother evacuated (with me) to Shreveport. Daddy stayed in Dry Creek and rode it out at the Old House. He said the eye of the storm came over that day and the skies cleared before the storm resumed. That’s where I get the part of Chapter 1 where the storm calms before catching Mayo in the open.

The Old House, built in 1892, has been through all of the storms mentioned above. The log room shifted during Audry and this resulted in the floor being slanted to this day. 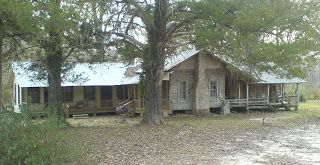 The Old House in Dry Creek circa 1892. It’s where I write and dream and is the most precious piece of real estate on earth for me. Built by my great great grandparents when they homesteaded this land, it still belongs to our family. One of my joys is showing readers around this special house. You’re welcome to a tour if you’re in the Dry Creek area.

The log room in Chapter 1 of A Good Place is patterned after the log chimney room shown in the picture..

The fun of writing fiction is taking true stories and weaving them into a narrative. It’s what I do and what I enjoy.

Did a hurricane really occur in 1862?
To my knowledge and research, there is no record of an actual storm in August 1862. Newspaper records from that time are very sketchy, especially about western Louisiana which was still literally a “No Man’s Land.”

Thoughts on historical accuracy– In writing historical fiction, I strive to be accurate and relevant. This doesn’t mean that every event happened when mentioned. It means that it could have and if it did, this is how it would have been.

I will confess to one part of the hurricane that is inaccurate (on purpose) It’s lightning. In spite of the ferocity of hurricanes, they don’t feature lightning and thunder. I have studied this as well as experienced it. (Rita, Gustav, and Ike are all recent storms that affected our area. None had lightning or thunder.)

However, for the dramatic effect of the storm hitting Ten Mile Community at night, I included lightning. The main sound I recall from Rita was the sound and crash of trees falling. It is a a feeling not easily forgotten!

I tried to blend the thunder of the storm, crashing of the trees, howling of the wind, and imagery of distant cannons of war into an audio setting to carry the reader into that one room log cabin under the table with Joe and Eliza, Mayo, Colleen, and a dog named Bo.

Your comments on chapter one and the storm are welcome.

I write to have influence and impact through well-told stories of my Louisiana and African sojourn.
@curtiles
Previous Sample Chapter A Good Place by Curt Iles
Next DRC: Congo Africa