(From Curt Iles’s third book, Wind in the Pines.)

“He who guards his mouth and his tongue keeps himself from calamity.” -Proverbs 21:23

You are probably familiar with the old story of the gossip who was confronted for spreading an untruth throughout the community. The offending “tale-bearer” apologized and volunteered to go back to everyone to whom she had told the lie.

The offended person, who was also very wise, took the gossip out on the front porch and tore open a tattered feather pillow. The wind blew the small downy feathers in every direction. Looking at the gossip, the wise person said, “Trying to track down everyone who has since heard your story is like trying to gather back all of these feathers is impossible.”

This “featherweight story” is a good thing for all of us to remember – Once our words are spoken, they are “recorded.”

She loved telling stories of her mother’s family and their lives in the Cajun community of Oberlin. Mama Pearl had many good stories, but the one she loved telling best was how her Uncle Quincy escaped from Angola Prison by swimming on the back of a mule across the Mississippi River.

As I became older, it amazed me at how the Godliest person I’ve ever known – my grandma, could be so proud of her uncle who had escaped from prison. But she loved her family and was always glad to tell the story one more time.

She told this specific story about a goose hunt Uncle Quincy went on. He and two other men were hunting in the rice fields near Oberlin. They had an extremely successful hunt, shooting down many geese.

Laying out their collection of dead geese they were surprised to see that one of the birds had a large metal band on its leg. Closer scrutiny revealed the band had a number and instructions on how to forward this number to the National Wildlife Service.

A further count surprised them that they were one goose over the limit. A quick recount confirmed the fact they had one too many geese to be legal. They were not about to leave a goose behind, so they picked up their geese, tying their legs of the geese together and hoisted them over their shoulders. 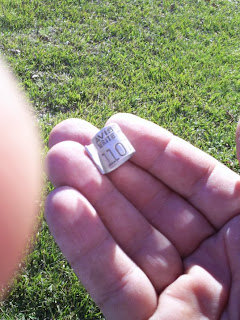 Nearing the edge of the field and their vehicle, they decided to leave behind one of the geese at the fence corner. This would mean they would be right on the limit of geese. Their plan was to come back and get the lone goose if they didn’t encounter a game warden at their vehicle.

It was a good decision because a federal game warden was waiting for them in the bushes near their vehicle. Together the men laid their geese in a line for counting, placed their guns on the ground for inspection, and took their licenses out of their wallets.

It took a while for the inspections and counting to take place. There just seemed to be need for a little small talk to make the time move quicker, so Uncle Quincy decided to liven up the conversation with this innocent remark, “You know one of those geese we killed had a metal band on its leg.”

The federal game warden stood up from his inspection. It was evident he was very interested in

Uncle Quincy’s statement. He asked, “Really, I’d like to see it and record the number for our study.”

The hunters and the game warden began to look for the goose with the metal band. After several attempts sorting through several dozen geese and finding no leg band, the warden looked up quizzically at Uncle Quincy.

Now, you already know what Uncle Quincy and his hunting buddies knew: the goose with the leg band was “hiding” back in the weeds at the fence corner.

Finally, after the four of them searched through the geese once more, the game warden’s stare met Uncle Quincy’s eyes. Uncle Quincy couldn’t think of but one thing to say,

“Well, I guess it must have fallen off between here and the blind.”

After the game warden got out of earshot, Uncle Quincy made a classic statement to his hunting partners,
“Well, they’ve never sent a man to the pen for keeping his mouth shut!”

I often think of Uncle Quincy’s goose when I get in a bind due to excessively running my mouth.
The wise writer of Proverbs said it well, “Where there is abundance of words, sin is not absent.”
Even James, the brother of Jesus said it so well, “If anyone considers himself religious and yet does not keep a tight rein on his tongue, he deceives himself and his religion is worthless.”
Jesus best summed it up:
“But I tell you that men will have to give account on the Day of Judgment for every careless word they have spoken. For by your words you will be acquitted, and by your words you will be condemned.”
-Matthew 12:36-37

It is good to remember that our words are recorded by those around us . . . And most importantly they are both heard, and “recorded” by the very ears of God.

The Proverbs reading plan:
Several times in the story above I have quoted from the wonderful book of Proverbs. It is full of short, wise sayings written especially to inform and educate young men and women.
I’d like to encourage you to read a chapter a day from this book of wisdom. Because of its’ length of thirty-one chapters, you can read the chapter that corresponds to the day of the month, reading through the book each month.