A Good Place by Curt Iles

Author’s notes: Our narrator, twelve year old Mayo Moore, is on a log raft trip down the Calcasieu River.  He relates an incident on the River as they near the sawmills on Lake Charles. This scene is my current favorite.  Special thanks to my friend Joe Chaney for sharing a similar family story with me. They let their lead raft drift close to the shady east bank. Just as they went under a low hanging willow limb, the hollering began. It sounded as if they were yelling, “Waltz, waltz.”

Daddy looked at me. “Are they shouting ‘Waltz’?”

They were jumping up and down, slinging their arms as if

fighting off an invisible foe. Daddy, who loved to dance, said,

“It’s sure a fast waltz if they’re dancing.”

We were puzzled as both of them dove into the river. When

they came up, we were closest enough to understand Unk’s

“I believe they got into a wasp nest.”

By now, the second raft, occupied by Pistol and Dan, neared

the same limb. Dan’s singing stopped abruptly as he and his

daddy tried like crazy to steer clear of the limb. It was too late

as hundreds of angry wasps awaited their arrival. I heard Pistol

We laughed as they plunged into the river.

just gonna hang on.” He lay down on his raft, using his hand as a

futile paddle to get away from the limb.

under the limb. Luckily, they had spread out, and there weren’t as

many to fend off. Seeing the futility of fighting them with his hat,

he rolled up in a ball, covering his head.

We could hear his muffled voice praying one sentence, and

cussing his lungs out the next.

Ahead of us were three rafts, two of them empty, and one

manned by a fellow alternating between swearing and entreating

the Lord. Three men were in the water and one—my uncle—was

Now it was our turn. Daddy didn’t even try to steer our raft

away, instead saying, “Let’s get in the water and hang onto the

side of our raft.”

Trying to forget about alligators, I eased into the water.

As we floated under the limb, Daddy said, “Look at the size of

that nest. It’s big as a pumpkin.” Hundreds of red wasps were on

it as well as swarming around. One popped me on the hand and

I yelled. Daddy thought it was real funny until one stung him on

the ear. Our yelling and movement attracted a whole wasp patrol

on us and he yelled, “Duck under!”

Before I could go under, several stung me, including one right

on the end of my nose. I dove under and stayed there until my

lungs burned. When I came up, we’d cleared the limb and were

out of the cloud of wasps. The other swimmers, now reboarded,

seemed to be enjoying our part of the show.

At the next bend, everyone pulled up to lick our wounds and

compare notes. Most of the men had dozens of stings. Pistol got

his knife out, scraping bark off one of the logs. He dug down

into the tree, scooping up pinesap, and daubed it on his stings.

Everyone followed his example, except his son Dan, who spit out

his chew of tobacco and began daubing it on his stings.

By now the humor of the situation began to sink in. Dan

began mocking Unk, “Wast. Wast. Watch out for the wasts.”

My uncle smiled, “I was just trying to warn you fellows.”

This was followed by Daddy mimicking Pistol, “Abandon ship.

Abandon ship.” as he poked our leader. “When your captain says

Everyone laughed, and we talked about it for the rest of the

float, embellishing every word and sting with each retelling. Soon

our encounter even had a name, “The Battle of Wast Bend.”

We floated the rest of the day, making sure to stay clear of

low-hanging limbs. As darkness came, we tied up at a small island

in the river. Due to several alligators we’d seen nearby, as well as

the abundance of snakes, everyone stayed on their rafts.

To order your copy of  (and learn about the rest of the log float and their long walk back home) visit http://www.creekbank.net

Would you like an autographed book plate? See end of post.“The Night They Drove Old Dixie Down is not a song about the Confederacy, it is a song of the Confederacy.” Click here to read entire website dedicated to the song. 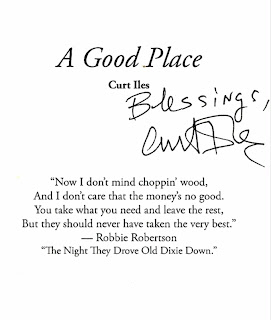 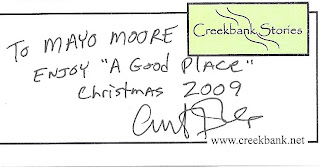 The Song that started the Book

When you open the first page of A Good Place, the page above is what you’ll see. (If it’s not autographed as shown above, I can send a personalized book plate to you via mail absolutely free. (See below)

As I wrote about the hard times piney woods families had during the Civil War, I went back to one of my favorite songs, The Night They Drove Old Dixie Down. It always touches me as I hear “Virgil Cain”* (the song’s narrator) tell about the loss and destruction he and his family experienced.

* Various spellings of the narrator are Cain/Caine/Kane. Notice Robertson’s use of the “Cain and Abel” link as the brother-against-brother part of the Civil War. I had people on both sides of the conflict.The verse above isn’t just referring to the taking of the trees, it relates also to the taking of young men, many who never returned. The song’s final verse tells of this.

“The Night They Drove Old Dixie Down” was written by Robbie Robertson, guitar player for The Band. It’s more than ironic that what many call “The greatest song ever about the American Civil War” was written by a Canadian of Cree Indian ancestry.

I have many versions of this song on my iPod. Click on links below for my favorite three YouTube versions. I’d like readers to vote on their favorite and why.

The Band at their Farewell Concert, “The Last Waltz” Lead singer: Levon Helm 1977

A recent version by the Georgia-based band, The Black Crows.