Such a sweet word.

We Americans cherish it.  Still celebrate it as a fire-cracking holiday each July.

The Independence story in South Sudan is bittersweet.

The following story shares why.

We spend about half of our time on The Journey.

Our Journey takes us into northern Uganda, South Sudan, and Kenya.

We are currently on a trip with our home church (Dry Creek Baptist LA) to their people group, the Kakwa. 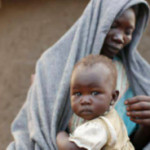 There is no love quite like a mother for her child. The happy birth of Baby Moses.

Full of hope and promise. His parents gave him the full name of Moses Independence. The mother, Josephine, shared of her high hopes (http://www.unicef.org/southsudan/reallives_birth_of_a_new_nation.html) for both her new son and the new country.

In fact, many South Sudanese referred to their nation as New Sudan. New Sudan.
A fresh start.
A new beginning.

Sadly, three years later, war has broken out in New Sudan. The future is uncertain.
It’s a tragic story of dashed hope.
Baby Independence’s story is even sadder.

He died before his first birthday. Details are sketchy. (http://www.mirror.co.uk/news/world-news/south-sudan-one-year-on-864311)

He became ill, got sicker, and the doctors and hospitals couldn’t help him.

Baby Independence will never see his country grow into a true land of freedom and peace.

It shouldn’t surprise us. Infant mortality is high.

The average life span of a man is slightly over fifty-four. That’s what war, poverty, and famine do to the health of a nation.

South Sudan is still a place where women stoically realize that pregnancy may be a terminal condition. They may die giving birth to a new life.

The life span of a South Sudanese man is less than 57 years. In Africa, the stats of those dying in war zones are not limited to mortars and machine guns. Many more die from malnutrition, opportunistic diseases, and famine.

Dead is dead. It doesn’t have to be by a bullet.

Since the December (2013) fighting broke out between the rebels and government, many have written the obituary of New Sudan.

“If they can’t get along for more than two years, what hope is there for this country?€

They fought the Arab north, where thousands died to bring this opportunity to become a new free nation, and now the selfishness of power-hungry leaders, has resulted in this ongoing war.

My home country, America, is known as the “Midwife of South Sudan.” Our government and aid organizations worked hard to broker the peace deal that created the world’s newest nation.

The United States has poured millions of dollars into South Sudan. America the Midwife is now watching its baby on life support.

Probably like the midwives who delivered Baby Moses Independence felt as sickness sapped his young life.

Helpless.
Wondering what went wrong.
What could have been done differently? South Sudan is on life support.
Her breathing is shallow.
But where there is breath, there’s life.

David Deng, the son of a Dinka chief and American mother, said it well, “If you’re not an optimist, you have no business being in South Sudan.”

Things can change.
Things can get better.
Even if Africa seems cursed, things can turn around. It won’t happen overnight. It won’t be easy. Progress is seldom easy nor free.

I come from the Louisiana Piney Woods.

I come from Louisiana, the heart of rural United States South. It was probably the last part of America to move beyond the scourges that hold people back. Infant mortality was high. Once I stood in the oldest part of Dry Creek Cemetery with my mentor, Mr. Frank Miller. He pointed at the weathered headstones. “Look how every tall tombstone is surrounded by small ones.”

He shook his head. “Most of the old timers buried at least one child. Some buried many.”

Pointing at one grave, he said, “She died in childbirth. It was all too common back then.”

The rural area that birthed me is much different now. I believe South Sudan can be also.

The new country has a long list of problems and challenges to overcome. The recent conflict has set this back. But there’s still life.

And hope. There’s a belief (held by those optimists like our Chadan team) that things can and will get better. I believe it’s through changed hearts and minds that the nation can step beyond the present despair.

Without apology, I believe hearts and minds are only changed by the Spirit of God coming into a person. That’s why we forge ahead with the Gospel.

It has the power to change lives.
And changed lives can produce a changed nation.

As another tough optimist/jailbird named Paul said, “Forgetting the past and striving for the future. . . .”

So, DeDe and I can honestly say that there’s no part of the world we feel that we can make a difference more than in South Sudan.

It won’t be easy. Good things seldom are.

That means there’s only one way to go.

Forward.
And with God’s help, Better.
We cannot take our hands off the plow. We will not look back.

Africa Stories (http://www.commissionstories.com/africa/stories/view/imb- missionary-reflects-on-the-third-birthday-of-south-sudan) recently featured another version of this story. Please read and pass on.

I write to have influence and impact through well-told stories of my Louisiana and African sojourn.
@curtiles
Previous “This is our Europe.”
Next If you want to go far . . .