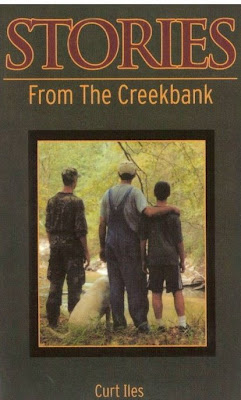 The first short story in my first book, Stories from the Creekbank, continues to be one of our reader’s favorites. It is entitled “The Evening Holler” and I’ve told it and read it to literally to hundreds of groups over the past ten years.

At the end of this short story is a special picture from Africa and a postscript to this story.

I sit in the woods on a cold still October morning. I love this time of year when the weather becomes cool and the sky is usually clear. I also like the beginning and end of each day as the sun rises or sets. As daybreak comes across Crooked Bayou swamp, it is so still and quiet. A mile through the woods I hear a neighbor’s roosters crowing. In another direction, I hear my brother in law’s loud voice scolding a dog. I’m always amazed at how sound carries so clearly and distinctly in the woods.

As it gets quiet again and I shift on my deer stand, a lone owl gives his eight-note song. Soon he is joined by another sentinel way across the swamp. These two barred owls converse back and forth in their unique eight-note call:“Hoo hoo-hoo hoo, hoo hoo-hoo hoawww” Always when I hear this owl, I recall old-timers describing his call as, “Who cooks for you? Who cooks for you?” Even when you know it’s an owl there’s something spooky about his eerie cry. As I listen to them, I’m drawn back to one of my favorite stories of the settling of our community.

Always when I hear those far off sounds in the woods, I recall the story of “The Evening Holler.” My great grandparents, Frank and Dosia Iles, told me of this event. This unique call, a tradition going back to the pre-Civil War settling of the Dry Creek area, was a primitive means of communication among these early settlers. The first white settlers in Dry Creek lived in the woods along the creeks and streams. They were surrounded by vast tracts of pine forests. This area of Southwestern Louisiana was a neutral strip claimed by both Spain and the United States. There was no law. Later on when there was law, the nearest officer was in Opelousas over seventy miles away. Indians, though friendly, stilled roamed the woods. Bears and mountain lions were common in the swamps.

Because these pioneers were homesteading tracts of land, they seldom built homes right next to each other. They were forced by necessity to depend on each other. Therefore, they developed an ingenious method of checking on the welfare of neighbors. Late in the evening at dusk, each man would stand in the yard or on the porch of his home. Just as the sun dropped behind the wooded horizon, the ritual would begin.

Each man would begin hollering his own individual yell. Each of the pioneers had his own unique hollering style- easily recognized by his own pitch and voice. The closest neighbor would answer back. The next neighbor down the creek would join him. As the evening holler passed down through the woods, each man would then be assured as to the well-being of his neighbor as he heard an answering yell in return. In spite of the distance between home places, the hollering carried for long distances. Remember, this was a time before televisions, air conditioners, or vehicles. There were fewer artificial sounds to drown out the evening noises. If you’ve ever really been out in the woods, you’ll understand what we mean when we call it “an eerie silence.”

My ancestors told me of how if a man did not hear the call of his neighbor, he would holler several more times at different intervals. If he still did not receive a reply, he’d go check on his neighbor. My great-grandmother told of seeing her father saddle up his horse to go check on a neighbor who did not answer. Even though things were usually fine at the neighbors, he went each time to double check. To him it was simply a matter of being a good neighbor. These early settlers took care of each other. The evening holler was kind of an early version of today’s Neighborhood watch. Sometimes when I’m enjoying the quietness of a fall sunset, I’ll hear the owls begin calling to each other across the woods. Or in April, I’ll listen to the whip-poor-wills as they answer each other with their own version of the evening holler. It’s at times like this that I think about the evening holler and what it meant . . .

It reminds me of how our ancestors took care of each other.They truly considered a neighbor . . . a neighbor.In our modern busy crowded life, we seldom know our neighbors- much less check on their well-being.Even with all of our marvelous modern communication tools from telephones to fax machines to e-mail, we usually know much less about our neighbors than our ancestors did.

As I sit here thinking about these things and how much we’ve lost in “neighborliness.”, my neighbor drives by in his truck.He honks as he sees me sitting on the p
orch.His truck is loaded with firewood.All fall and into winter, he cuts firewood for the widows and needy of our community.He’s on his way with a load to give someone right now.Then the thought hits me:maybe the evening holler is not as dead an art as I think it is.

Then I recall another neighbor who daily checks on an elderly woman who lives alone.He makes time to take care of this person.Then I think of my parents who’ve always picked up the mail for another home-bound senior adult.I then remember the times, when after a house fire in our community, people have banded together to supply needed items and volunteer to help rebuild the home.I recall the time-honored Southern tradition of supplying food to families who’ve had a death.

As I think of each of these, and many more I could name, I realize how much good and caring there still is in people.

Yes, times have changed.We don’t live in as close contact with our neighbors as we should.As humans we need to take ownership on the care of our neighbors.It is a decision that each of us can choose to do.It is a positive decision that many of my community neighbors have chosen to do.As I take time to really look, I still see the spirit of the evening holler alive and well in a small community I love called Dry Creek. 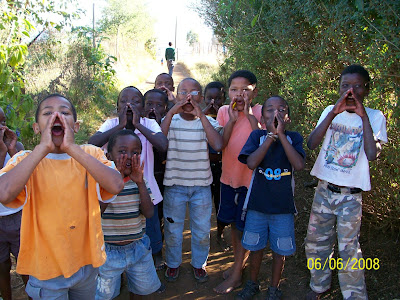 Last summer (2008) DeDe and I traveled to South Africa for a mission trip among the Zulu people group on the eastern coast of that country.

My assignment was to tell stories and relate them to the gospel of Jesus Christ. I was excited about this because I love stories and love Jesus.

However, I was also somewhat intimidated. I knew I would be using a Zulu interpreter. So much of storytelling is in the timing, specific wording, and gestures. I wondered if that would be lost in translation.

Most of our time was spent with the Zulu young people in an area called “Sweetwaters.” We immediately fell in love with these new friends. Additionally, my interpreter, Syvion Myeoni, was great and fun to work with.

The favorite story of the Zulu people was the one you’ve just read—“The Evening Holler.” I tied it in with Jesus’ parable of “The Good Samaritan.” We shared about how when people are hurting, we should go to them and help. This was very poignant, as I knew all of those listening had been touched directly by the ongoing HIV/AIDS epidemic of their area. (Zululand has an estimated 40% positive HIV rate)

During our final week there, we returned to areas we’d visited. Walking up a dusty trail, we were greeted by the boys in this picture. When they saw me (bald-headed white men stick out in Zulu land!) they began hooting just like a barred owl.

Just as I’d done during my story, they cupped their hands to their mouth and imitated perfectly the call of our local southern owl. Being an oral society, Zulus capture a story and sounds much better than we distracted Americans. These boys had it down perfectly.

It was a seminal moment for me. I realized that a story transcends culture, continent, race, and background.

The mission statement of Creekbank Stories is “connecting hearts to God through stories.” It is the desire of my writing and speaking. I’m not sure always how well I do that, but I’m convinced that a story I told in a dusty yard in a former South African township connected.

I’m convinced that those words, gestures, and emotions will continue in a ripple effect.
That’s what it’s all about.

To hear the call of the barred owl, click here. 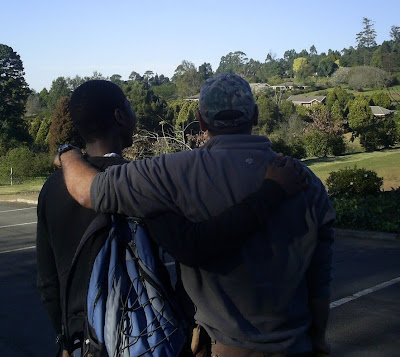 Pictured above is my friend, brother, and interpreter Syvion Myeoni. He’d read several of my books and requested these two pictures.(on right with us facing away.) He commented, “You’re always facing away on the book covers. Let’s take a picture like that.”

To learn more about The Evening Holler and the book it came from, Stories from the Creekbank, visit us at http://www.creekbank.net 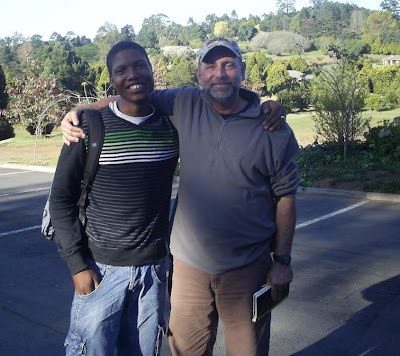