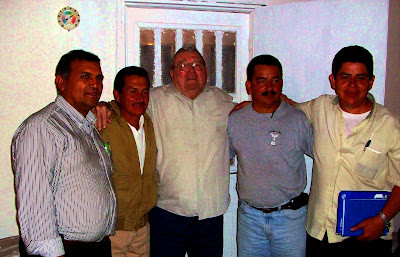 My friend Billy Harper arrived back in Louisiana today. When I left him a week ago in Honduras, we agreed to visit in a week.

However, his flight into Houston was different than he’d planned. His body was in a casket and was now making its way to the cemetery at Shiloh where much of his family is buried.

However, I’m not sure Billy’s heart made it back—He’d already left it in Honduras.

During my week long visit in Honduras, a word kept cropping up repeatedly. It has become, and will probably remain, my favorite Spanish word.

The word is corazon.

They say it cora-san. I never said it correctly and Hondurans would smile at my futile attempts, but I know exactly what it means—it’s their word for heart.

It’s a word I’ll always associate with my friend Billy.

During my week in Honduras as a guest of Billy and his wife Betty, I was able to see firsthand the work of his hands and heart from the past twenty years. The four strong churches he helped found, the hundreds of friends he’d made in Santa Ana and the area south of Tegucigalpa, were all testimony of how he’d poured his life into God’s work there.

I visited a Honduran public school library where a framed photo of Billy and Betty Harper hung next to the country’s President. The Harpers had donated books and encyclopedias to the school. After Billy’s death, the school principal sent a written “Agreement of Grief” to Betty expressing how they planned to mourn for the entire week.

Billy Harper was a lifelong friend of my father. They grew up together in Dry Creek. Billy was a “what you see is what you get” type of fellow—just as comfortable in a sawmill cutting cross ties as he was in the pulpit. There was no pretense or fanciness about Billy—I believe that’s one of the reasons the Hondurans loved him deeply. They knew he was genuine. It’s a quality that cannot be hidden nor manufactured.

For the last twenty years of his life, he found his life’s work in the central American country of Honduras.

He had a heart for its people and it was all about that word—corazon.

I was privileged to spend the last week of Billy’s life working beside him. He was sick for most of that week and that is why his death, although it shocked me, didn’t surprise me.

However, he spent the last week of his life right where he wanted to be—among his friends and churches in rural Honduras. It’s where his heart was. Corazon.

During these last days, I’ve continued to recall things he said that last week. Most memorably, he told me, “Curt, some people live their whole life and never get to make a lasting difference in this world. God has allowed me to be a part of something here that will outlive me and affect eternity.”

When work springs from the heart of a man or woman in service to God, it makes a difference.

It’s a matter of corazon.

A matter of the heart.

Last Sunday night, only three days before his death, Billy Harper struggled out of his sick bed and was part of a meeting of the four pastors he worked closely with. As we evaluated the week’s work, each man shared excitedly about their vision for God’s work at their respective churches.

Billy sat there with a smile on his face, full of pride as a father has for his sons. I asked the pastors, through a translator, “What would your churches do if no Americans were ever allowed to come back down here?”

Each one answered confidently, “We would continue on in this work. It is not the work of Americans or any man—it’s God’s work.”

I glanced at Billy as he nodded in confident agreement.

Betty Harper told me that after Billy’s death, the four pastors and their churches took charge of purchasing a casket, clothes, and taking care of every part of his voyage home through Honduras and back to Louisiana. Church members rode buses, walked for miles, and came by the hundreds to show their respect. She said she’d never seen such an outpouring of love.

I know Billy Harper’s American family wished they could’ve been with him for his last hours. However, he was right where he wanted to be—in Honduras.

And because I was there for most of those last days, I can attest that he finished strong.

He saved the best for last.

I put it this way: every rural man wants to die with his boots on, and that is how Billy left this earth.

I’m sure his death certificate will list something about his heart being the cause of death, but that will not be totally accurate.

His best days were his last.
His best years of ministry were his final ones.
We would all do well to wish that for ourselves.

To finish strong.
To finish faithfully.

When informed of Billy’s death, I pictured an image of him walking into heaven and hearing “Well done, good and faithful servant.”

I once heard an older preacher share about “having one foot in heaven.” He explained that when we’re busy in God’s work—seeing to eternal things—we already have a foot in heaven, even as our body is solidly on earth.

He continued with the thought that when we step into heaven, the people we’ve invested in and the work we’ve done for God continues. In spite of our presence in heaven, we still have a foot back on earth.

That describes about Billy’s work in both Honduras and Louisiana. It continues on.

Yes, Billy’s body will be laid to rest Wednesday beside his precious first wife Rose.
However, his soul won’t be there. I believe his soul is presently with Jesus.

And his heart… It reminds me of the death of the famed African explorer and missionary, David Livingstone. His body was delivered to England for burial, but the Africans he loved deeply insisted on removing his heart and burying it there.

They understood about the heart, or corazon, or whatever the word is in their language.

Yes in Spanish, they call it “corazon” and it’s my favorite word in their language.