The Sweet Smell of Honeysuckle 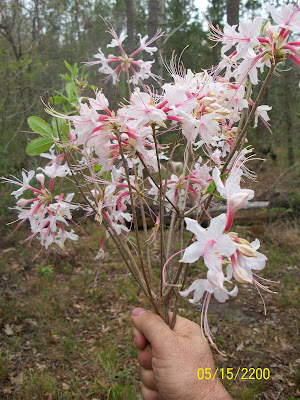 Honeysuckle time is when I always think of Mrs. Eleanor Andrews.

Today is her birthday.

Enjoy this story in her memory and as a celebration of her rich life.

I live in the deep South by choice.
In spite of any shortcomings Louisiana may have, it has been a wonderful place to raise our family and live life to the fullest.

There is one season when I’m most glad to be a “Louisianian.”

And there are two major reasons why.
The first is the sweet fragrance of honeysuckle.

The second is the visual fragrance of white dogwoods under green pines.

Last week I saw my first honeysuckle blooms of this new year. As always, it made me think of my friend, Eleanor Andrews.
The following story will explain why.

The Sweet Smell of Honeysuckle

When spring arrives and everything is blooming, I always make time to go into Dry Creek swamp to check on the honeysuckle. Because I’ve spent all of my life in the Deep South, I don’t know if wild honeysuckle bushes are found all over America. I simply know that when they bloom in early March there is nothing prettier or sweeter to smell.

The honeysuckle, or wild azalea as it is often called, is actually a small tree that more resembles a bush. It is found naturally along small streams and creeks, and doesn’t grow very large. Other than a few weeks in the spring, it is unnoticed and unremarkable. However, when it blooms, it outshines every other tree or shrub in the swamp.

Another thing that makes it so special is its rarity. You won’t find it growing along roadsides. Normally, you have to get off the beaten path to find honeysuckle. The fragrance of its pale pink blossoms is hard to describe.

The “honey” in honeysuckle is the best way I know to describe its smell. It has a sweet smell that is pleasant to the nose and once you’ve enjoyed it, you never forget it.

Many times I’ve been in the woods after a March rain and smelled honeysuckle long before I was near enough to see the bushes.

Because I’m on a honeysuckle kick and thinking about enjoying the little things in life, I even have my co-worker, Debra Tyler, who loves the outdoors as much as I do, put on the sign at the camp entrance, “Don’t forget to stop and smell the honeysuckle.”

During honeysuckle season, I always love to bring my wife, DeDe, a bouquet of honeysuckle. She places them in a vase which she then sets on the kitchen table. For several days, the fragrance greets you the instant you enter the house. That pungent, indescribable smell always makes me smile inside. It reminds me of childhood Sunday afternoon walks in the woods with my family. It was a time of less rushing about when people took more time to be together, often in the outdoors. 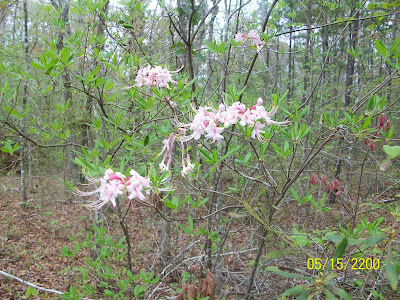 Honeysuckle time is when I always think of Mrs. Eleanor Andrews. No one in Dry Creek loves flowers, gardens, and plants more than Mrs. Andrews. Even though she has been an invalid for many years, she still has the prettiest yard in our community. She loves to sit by her window and point out the tulips, periwinkles, dogwoods, azaleas, and countless flowers as they each bloom in their respective seasons. Mrs. Andrews, my beloved fifth grade teacher, taught practically every young person in Dry Creek for over two decades. This sweet lady loves honeysuckle, and nature, as much as anyone I know.

Each year her son Charlie, who had a doctorate in horticulture, would bring her a beautiful bouquet of honeysuckle blossoms from the woods. She’d proudly display it on her kitchen table. When Charlie died suddenly a few years ago, spring came and the time for her honeysuckle bouquet arrived.

Loretta Bushnell Langley, who takes special care of Mrs. Andrews, told her dad about Charlie’s bouquet. Sure enough the next week, Mrs. Andrews had her annual bouquet—picked and prepared by Jessie Bushnell. I can just see Jessie driving up in his old truck with a bedful of barking dogs riding in the back. Dressed in his welder’s cap and old overalls, he joyfully brings this gift to this special lady. I know how Jessie feels—just as if he is in elementary school again, bringing an apple to his favorite teacher.

Now, my annual job is to bring Mrs. Andrews a Christmas tree. I still break out in a cold sweat hoping the tree I selected meets her exacting eye. Once again I’m ten years old, handing in my multiplication tables to Eleanor Andrews.

I’m sure Jesse thinks the same thing as me when he approaches her porch, “Will I have this privilege next year, or will she be gone?” She is over eighty and not in good health. She has been my special friend for nearly forty years, and I can’t imagine spring in Dry Creek without her presence.

Last week, Mrs. Andrews fell and hit her head. She was sent to the nearby Kinder hospital where they discovered she had double pneumonia. Then, she had a heart attack and was rushed to a larger hospital in Lake Charles. Since then she has steadily gone down.

..
. . . It’s early March and she lays in the hospital fighting for her life . . . It’s early spring and the plants are blooming here in Dry Creek. It’s hard to believe Eleanor Andrews will probably die in the middle of her favorite time of year. I’d always thought she would leave us in the dead of winter, when the trees were bare and her garden was empty.

That night I returned late from a meeting. As I neared home in the darkness, I stopped at the bridge over Mill Bayou anyway. In a light rain, I climbed the barbed wire fence and stepped carefully in the darkness toward the creek. I had my flashlight to watch for snakes. With its light, I found what I was looking for—a small honeysuckle bush. I picked a bouquet of honeysuckle. The smell, so sweet and fragrant in the heavy night air, reminds me of how much I love spring.

Arriving home from my honeysuckle expedition, I carefully placed my bouquet in a green vase with water. The next morning, bouquet in hand, I left early for the drive to St. Patrick’s hospital in Lake Charles.

Quietly, I eased in to the ICU where Mrs. Eleanor Andrews lay surrounded by tubes and monitors, her face covered with an oxygen mask. When she sees me, I’m greeted with the smile that has lit up my life since I was eleven years old. I lean down close because her voice is very weak. In spite of the effort required to speak, she begins talking non-stop, the smile never leaving her face.

Most of what she says I cannot understand because of the oxygen mask. However, she says one thing that I hear very clearly. She looks me squarely in the eyes and says weakly, “I’m going home today
.”

For a moment I think she’s confused and believes she is going to her home in Dry Creek. When she reads the confusion on my face, she repeats in a stronger voice and with more emphasis on the word “home.”
“No, I’m going home today.”
The look in her eyes and the smile on her face tell me even more than her words. She is going home and she’s looking forward to it. She has suffered enough, most of her loved ones are already on the other side, and she’s ready to go. Nothing, not even her beloved flowers and yard in Dry Creek, can cause her to stay on this earth any longer.

I lean down and kiss her on the cheek one last time. Walking out of the cubicle, I look back for one final glance. There, on the stand by her bed, is the green vase of pink honeysuckle.

One last time I look back at her face, still smiling in spite of the oxygen mask covering her face. Once more, I glance at the honeysuckle bouquet, then wave goodbye, and walk away.

Mrs. Eleanor Andrews was wrong by one day. She died the next day at 10:30 a.m. on Thursday, March 16, 2000. When they called me with this news, my heart was filled with a selfish sadness, but there was no sadness for her because the suffering of her worn out body had ended. She knew the Lord personally, and as it is promised in scripture,
“Absent from the body . . . present with the Lord.” II Corinthians 5:8
She was now at home with her God.

There was a “beautiful conspiracy” to take care of her so she could continue independently living at home. All of us who love her always had the fear she would be forced to leave her yard and flowers, to reside in a nursing home.

In the days following her death, I think back to so many special memories of Eleanor Andrews. I smile as I remember how she favored boys in her class over the girls. Because I was a “Dry Creek boy,” she gave me a little extra attention and did what the best teachers always do—made me feel as if I was the most special student in the world.

Then I jump ahead thirty years to her seventy-eighth birthday. We held a party for her at the Old Dry Creek School building where she’d taught for so many years. She fussed at us for planning this event without her permission.

The actual week of the party, she was nervous and agitated. She kept saying, “No one is going to come. There won’t be a hand full of people to see an old woman like me.”
Sunday arrived and she was taken to the schoolhouse where she’d attended school and later taught.

People began coming, and kept coming—a long line of her grandchildren, country men who’d sat in her classroom, ladies who’d first been taught by her in Bible school, and old friends with whom she’d graduated from high school with in this very same building.

What a special day it was for Eleanor Andrews!

When the party was over and the crowd cleared out, she gave me a look that froze me in my tracks. In that gravelly crackled voice I loved so much, she said, “Well, I guess I can forgive you now for planning this without my permission.” Then she broke out into a huge smile and said, “Today, I’ve had one of the finest days of my entire life.”
Nearly two years after that special day, she had another special day.
She went home.

She had a fine funeral and sendoff. She was greatly loved and her memorial service was a fitting mixture of laughter and tears. Sorrow and joy.

We carried her to Dry Creek Cemetery and deposited her beside her husband and two sons.
Driving home that sunny March day, I noticed that the honeysuckle at Mill Bayou has lost its last blossoms of the year.

But deep down in my soul, I believed I could still smell the sweet and wonderful fragrance of honeysuckle. I wondered something: I wonder if there is wild honeysuckle
in Heaven?

I sure hope so.

Honeysuckles are one of my favorite smells. Here are the others that take me back: Cut hay, freshly plowed dirt, DeDe’s hair, steak cooking on a grill, the smell of the ocean. I’d like to hear from you. What are your most memorable smells?

Email me with yours and I’ll answer back. 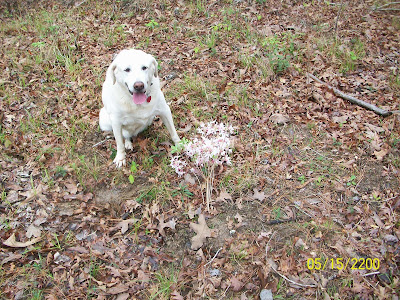 I write to have influence and impact through well-told stories of my Louisiana and African sojourn.
@curtiles
Previous The Crow and the Peacock
Next On Being “The Man”