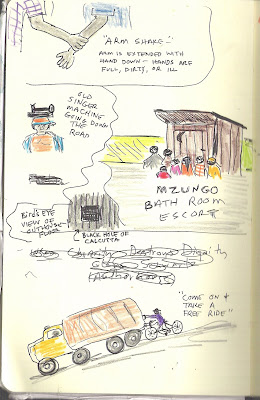 Top left If an African’s hands are dirty, wet, or they’ve been ill, they’ll extend their wrist to shake.

Middle left: Everything can be carried on an African head. The old sewing machine was my favorite.

Middle right: Every move of a “Mzungo” (white man) is followed closely. Even a trip to the outhouse draws a crowd or children, who will faithfully await your return.

Bottom: There’s always an easier (but dangerous) way to do everything. There were actually two bike riders catching “a free ride.” 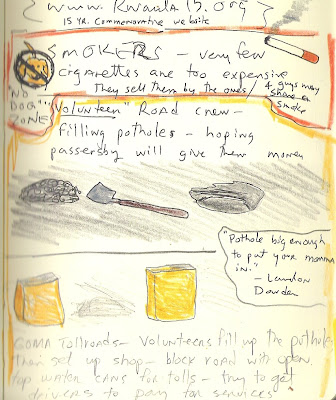 the roads in and around Goma, Congo are the roughest I’ve been on (and I’ve been on some bone-jarrers and teeth-shakers.)

As a result of war and poverty, very few Congolese roads are paved.
Goma is built on volcanic rock and that is what the roads are made of.

Potholes are numerous, deep, and ready to break any vehicle suspension.

The sketch above relates to a group of “volunteers” who are patching the potholes with small rocks.

When finished, they set up empty water cans as a barrier across the street and “invite drivers” to donate in appreciation of their work.

They are reluctant to move the can barriers without a franc or two.
It’s an African toll road at its most basic form.

I admired these entrepreneurs. They were out working, making the road better, and showing inititative.

An African tollroad.
In a town called Goma.

Upper portion of page: Two things you don’t see in Goma: pets or cigarettes. The absence of these two are so illustrative of the poverty in this area.

No one can afford a pet.
And if you had one, it’d probably be stolen (and possible eaten.)
Few people smoke because it is simply too expensive a habit. Cigarettes are sold singly and usually shared among a small group.

One of the fascinating parts of our trip to Congo was being in a city surrounded by five active volcanoes.

Nearby Mt. Nyiragongo belched smoke the entire time. At night it gave off an eerie red glow from its crater. 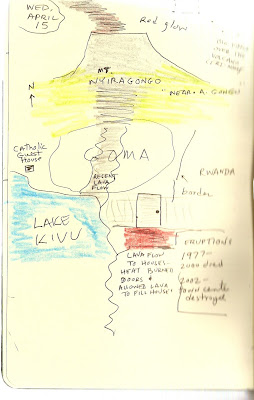 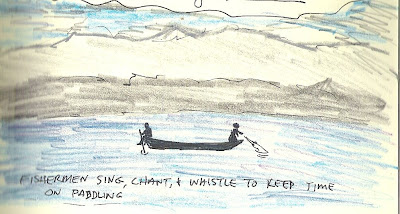 We stayed at a Catholic guesthouse in Goma. It sat on Lake Kivu, one of Central Africa’s “Great Lakes.” 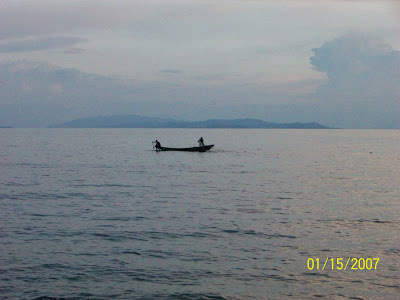 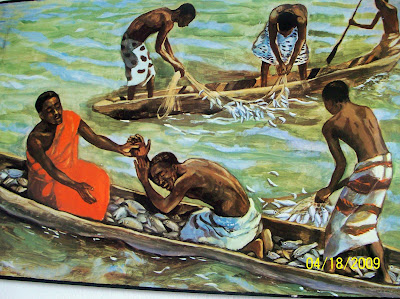 The Catholic guesthouse we stayed in had wonderful paintings on the wall. This was my favorite: Peter bowing to Jesus in the midst of a miraculous catch of fish on the Sea of Galilee.

Because the guesthouse sat on a large lake (Lake Kivu) this picture really connected with my heart.

My favorite part of the narrative is when they got ashore, Peter and his fishing crew “left the nets and followed Jesus.” They left behind the catch of a lifetime to follow Jesus.

He’s worth following.
He is worth whatever it takes.

I especially like how this picture (and the others in the guesthouse) showed an African Jesus.

Central Africa’s Lake Kivu serves as part of the border between Democratic Congo and Rwanda.
Some of its sister lakes (Lake Victoria in Uganda is the largest and Lake Tanganyika is where Stanley stumbled up on David Livingstone and uttered, “Dr. Livingstone, I presume.”) are larger and more well-known, but I cannot imagine their being more beautiful.