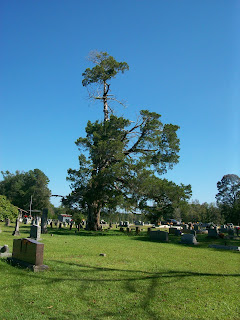 This story, from my second book, The Old House, tells about a sacred place in our community: Dry Creek Cemetery.

Later in the story, I share the touching and heroic tale of my friend and neighbor, Arlean Crow Courmier. Yesterday, we buried her father, Arthur Crow, beside Arlean’s grave. As we stood by his grave, several folks pointed out the old cedar tree that is the touchstone of the following story.

In the next day or so, I plan on sharing a hilarious story from the cemetery. Today’s story is much more serious.

I tell it in honor and memory of Arthur and Annie Mae Crow, married for nearly 66 years. He was a WWII airman from Idaho. He met Mrs. Annie Mae while stationed at the Alexandria Air Force Base, married her, and never left Dry Creek after the war’s end. 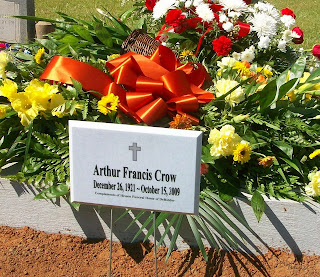 Driving through the fog of an October morning, it is hard to see very far down the narrow paved road. My truck windshield fights a losing battle with the Louisiana fog and humidity. As I near my destination, Dry Creek Cemetery, I can barely make out figures walking in the cemetery amidst the thick fog, but I know Mr. Leonard Spears is out there.

Today is the second Sunday in October, which is always an important day in Dry Creek. On this date the annual Dry Creek Cemetery memorial service is held. Hundreds of people will travel from as far away as California or Florida to be present for this special day. Today, I’ll see folks whom I only see once a year when they return on this day to their Dry Creek roots. However, most of those here today will be like me—country people who’ve never flown far from the nest in Beauregard and Allen Parish.

Of all the people who will make this a special occasion, there is no one this day means more to than Leonard Spears. Here’s why:

Dry Creek Cemetery was originally called Spears Cemetery. The land on which our cemetery now sits was owned by Mr. Leonard Spears’ grandfather, Leonard “Len” Daniel Spears. This plot of land, located near the forks of two streams, Bundick Creek and Dry Creek, became a cemetery through a long ago heart-breaking event linked with an act of kindness.

During the nineteenth century, the settlement of Dry Creek was on the main road used by many early settlers as they traveled between the cities of Lake Charles and Alexandria. About twenty years after the Civil War ended, a migrant family headed west to Texas, stopped their wagon in our area due to a very young daughter. While camped here, this child died. Mr. Len Spears went to this family and offered to let them bury her in a corner of his field. Because no permanent headstone was available, a small cedar tree was planted by the wooden grave marker. That old and gnarled tree, now over a century old, still stands today in the center of what is today called Dry Creek Cemetery.

The grave of this pioneer child became the first of many, in what originally became known as Spears Cemetery. It soon became the primary burial spot in our community. Years later, its name was changed to Dry Creek Cemetery.

It is a special and sacred place for those who have buried the bodies of loved ones here. Just last week some volunteers at the camp from Minnesota drove to the cemetery. Upon returning, they told me, “I’ve never seen a more well-kept cemetery than the one in your community.”

So on this October morning, it is with pride and deep reverence that I approach the cemetery. In the fog, I can barely make out the farthest tombstones and the background of pines and oaks beyond the south fence line. Through this mist, I can barely make out the huge cedar tree standing among the oldest graves in the cemetery. Its limbs are now twisted and the bark shows the signs of surviving years of storms and weather extremes. Yet, despite the toll of the years, it stands nobly as a silent reminder of a rich history.

This big cedar tree seems to be saying, “I’ve been here a long time and I’ve seen a great deal. Yes, I’ve lost many limbs and may look decrepit, but I’m still standing.”

In the South, most old cemeteries have a cedar tree growing in the area near where the earliest graves are. The early settlers, very familiar with death, would plant a cedar tree to symbolize everlasting life. With its year round green needles, the cedar tree bore stark testimony to the belief of life after death.

This cedar at Dry Creek Cemetery has survived the changing seasons, droughts, storms, and sits in the middle of an increasing number of surrounding tombstones. It serves as a reminder to each visitor here of how death is not the end- death is only the end of life as we know it. This tree seemed to be saying, “Look at me. Look at my evergreen needles. What you are looking at around you, these graves, are not the end, but only the beginning.”

About two years ago, a fast-moving spring storm blew through our community. The strongest winds were in the cemetery area, where numerous large trees were blown down. Someone called and said that one of the largest limbs on the old cedar had broken off and fell right on about a dozen old graves.

In mind I imagined broken headstones all over that area of the cemetery. Arriving, I was shocked at how large the broken limb was. On the upper trunk of the cedar, you could see where it had broken off. The loss of the large limb left the tree looking lopsided. As reported, it had fallen right on a large number of tombstones.

To our amazement, not one marker was broken by this huge twenty-foot long limb. Several headstones were pushed over, but none were broken. If was as if the old tree had carefully lay down its lost limb among the graves.

Within a week, the limb had been cut up and the area cleaned. The only reminder of what had occurred was the fresh wound down the cedar’s trunk. There was some talk of cutting down the tree before other limbs fell. However, our cemetery board decided to leave the tree as it was for now.

Today, on memorial day, as I stand under the cedar and look around at the hundreds of graves in every direction, I’m so glad the old cedar was given a reprieve from the chainsaw. I know one day it will fall and the cemetery will seem bare without it, but its demise will once again be a reminder of the temporary nature of our lives.

I’m reminded of how our former pastor, Logan Skiles, referred to cemeteries as “the city of the dead.” As I look at the markers of various sizes, heights, and ages, it really does resemble a city. There are passageways like streets, and the markers from a distance line up like the tall buildings of a large city.

My primary job at the cemetery is to help families pick out their gravesites. It is both a labor of love and a ministry for me. It is humbling and sobering to stand with a family as they grieve and make final plans on the resting place of a loved one. Thinking of this, my mind immediately goes back to my friend, Arlean.

Arlean is ten years older than I am. We grew up together in Dry Creek. Arlean’s grandmother, Aunt Annie Mercer, cooked in the camp kitchen during my young teenage years. Aunt Annie took me under her wing and just loved on me, and for that I will always be grateful.

Arlean and her husband, Jerry, live just down the road from my house. They are my neighbors and friends. One day, Arlean phoned me with the call I’d been dreading. She was ready to go to the cemetery and pick out her spot.

So on this day, I found myself standing with Arlean in Dry Creek Cemetery. But we aren’t alone- Jerry is with his wife. Also present was their daughter Dana and Arlean’s pride and joy, her granddaughter, Olivia. Arlean’s parents, Arthur and Annie Mae Crow, stood to the side as we gathered in the southeast corner of the cemetery.

Arlean had battled cancer enduring a long and heroic fight. She had inspired everyone as we saw how tough, resilient, and positive she had been in this fight. She was aided in this by her family, church, and her deep faith in God.

Standing there today, we all make small talk, but everyone knows the reason we are here. One by one, each family member points out their requested spot as I record it in the record book. Annie Mae Crow wants to be placed next to her mother, and the rest of the family selects spots close by. Arlean walks to the place where her baby, who died in childbirth, is buried. She tenderly stands near that small tombstone and simply points to this spot beside her child.

As we silently stand there, it’s evident this trip has exhausted Arlean, so the Crow and Courmier families get in their vehicles to leave. I walk over the truck window and look into Arlean’s eyes. There is a look of peace in her eyes that says more than words could ever describe. I put my hand on her hand and we smile. To me, this is one of those moments where reverent quietness speaks loudest. Words are not appropriate, nor needed, right now.
Everyone waves as four generations of the Crow family drive back to their homes. I am left alone among the hundreds of surrounding tombstones- each one a silent and mute testimony to the life of a human.
# # #

Two weeks later Arlean died at home with dignity and peace. The next day I met the gravediggers at the cemetery and pointed out the spot for Arlean’s burial. Her funeral, held two days later at our church, was a beautiful celebration of her life and love of family. I chose not to go to the cemetery for her burial later that afternoon. I knew the recent time we had spent there together was much more important.

A week later, I went to the cemetery. The first thing I noticed as I walked
to Arlean’s spot was not the flowers, or the fresh dirt on her grave, or the nearby graves of my beloved grandparents, or the even the open area where I will one day be laid to rest, but my gaze was fixed on something else.there in the cemetery- the bright green limbs of a stately old evergreen cedar tree, standing proudly in the middle of Dry Creek Cemetery.

My eyes were riveted to only one thing