My short story collection, Christmas Jelly, was written in 32 chapters.  This allows you (the reader) to

enjoy one chapter per day beginning on December 1 and ending on January 1.

Santa Claus is Coming . . . to School

I’ve learned this: life is always better than fiction. You cannot make up a story that outdoes the truth.

Gordon Copeland sat in my office as I read his resume.

“Mr. Copeland, you have impressive credentials for a substitute teacher.”

He was a barrel chested man in his late sixties. A thick head of white hair and long beard to match it. A hearty laugh. Red cheeks.

“Has anyone ever told you look like Santa Claus?”

He laughed. “Everyday. In Florida, I did a good bit of Santa Claus roles. Even did a commercial for Coca-Cola. This year I’d like to make a little extra substituting.”

“Good. We always need substitutes for the three weeks between Thanksgiving and Christmas. I’ll be calling you.”

I’ll never forget the first day he worked in the first and second grade hall. It was early December—always an interesting time in our K-12 rural school.

Like electricity, it spread through the hall: Santa Claus is taking Mrs. King’s place today.

He wasn’t dressed in red and white. He had on cowboy boots and blue slacks. But he was still Santa Claus to these first graders.

My job as assistant principal was coordinating the substitutes. I peeked into his classroom several times that day. The students were quiet as a mouse, working at their desks. This was not normal behavior when a substitute teacher was present.

But this wasn’t just any substitute. This was Santa Claus.

He had a weapon stronger than any paddle or time-out corner.

They didn’t want a bag of switches come Christmas morning.

I mean this is a man about who children sing,

Mr. Copeland’s noontime appearance in the lunchroom created a minor riot. When I set my plate down at the teacher table, one of them commented dryly, “I don’t believe having Santa Claus substitute is such a good idea.”

I nodded. “It’s made Brandon and Willie behave in Mrs. King’s Class.”

“That’s a miracle. But it’s made the other hundred students crazy.”

Mr. Copeland became a frequent sub during that Christmas season. The reaction was always the same. His class was on their best behavior, but the other students couldn’t concentrate with Santa Claus next door or down the hallway.

Gordon Copeland also substituted in the upper grades. They weren’t true believers and didn’t respond with quite the same level of respect or awe.

He became my friend during that year and served our school well.

He didn’t return the next Christmas season. He told me he’d take his chances at department stores and malls “ho ho ho-ing” over corralling students in a classroom.

The next year Gordon Copeland died of a sudden heart attack. I still miss him and smile when I recall him roaming the East Beauregard Elementary hallway to cries of “Santa Claus is here. Santa Claus is coming to school.”

He knows when you’ve been sleeping.

He knows when you’re awake.

He knows whether you been bad or good

So be good for goodness sake.

I found a wonderful story about the all-seeing eye while reading a biography of the great African statesman, Albert Schweitzer:

Schweitzer related the story of a one-eyed European lumberman who worked near his compound. The lumberman needed to go away on business, so he took out his glass eye, laid it on his desk, and called in his African workers. “I’ll be gone for a while, but I’m leaving my eye to watch your work while I’m gone.”

He returned in several weeks and was delighted that every chore and job had been completed. He had solved the problem of absentee supervision of his work crew

A few months later he needed to make another longer trip. He repeated his earlier statement and left the glass eye on his desk “to watch things.”

He returned to find work piled up everywhere. Nothing had been done. Dismayed, he rushed into his office to see what had happened.

In the middle of his desk was a large hat. He lifted it to find the glass eye.

Now what does a glass eye, Santa Claus as a substitute, and Christmas have to do each other?

We laugh at the Africans and their belief in the magical all-seeing eye.

However, there is a true-all seeing eye. It’s called God.

We believe he is everywhere so he sees all. Omnipresent

He is all powerful. Omnipotent.

Yet, we puny humans think we can put a hat over God and go our merry way. That’s way more silly than believing in the power of a glass eye.

Throughout the Bible we find the term,  “Fear the Lord.”   There’s lots of discussion on does this mean awesome respect, cowering fear, or more.

The answer is yes.

We should have an awesome respect for God. He created all there is. He controls all things. His ways are far above our ways.

And we should have a healthy dose of fear. Not cowering fear but reverent fear. A fear factor that affects everything we do—or don’t do. Our actions and attitudes should be seen through the prism of “we will answer before God for ‘every idle word’ one day.”

My personal take on this is that my fear of God is rooted in not wanting to disappoint Him. I love Him. I revere Him. Yes, I fear him. I don’t want to be found wanting in my commitment and devotion to Him.

Christmas is always a good time for introspection.

Looking inside ourselves at what our priorities really are.

A look in the mirror at whom we’re becoming.

Somebody is watching you and me.

He doesn’t wear a red suit or carry switches.

Neither does he have a glass eye.

Somebody is watching me.

If I truly believe that, it’ll make a difference in how I live. 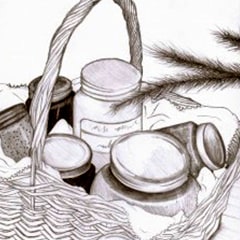 Order your copy(s) of Christmas Jelly at Amazon or www.creekbank.net
You can order autographed copies as Christmas gifts by ordering through our E-Junkie site.  If you’d like a personalized signature, please make note.

As you plan on your stocking stuffing, remember that our Creekbank ebooks and paper books make great presents.
We love hearing from readers and friends.  Send a Holiday greeting below.